ToDoPlus is a free task management software for Windows using which you can create task and to-do lists. This free task management application comes packed with all kinds of options, but the thing that we found most interesting is that it offers password protection of task lists which you don’t want other people to see. 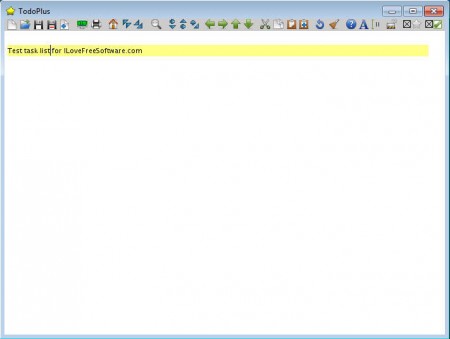 Check out some similar software reviewed by us like: Cobain Backup, aiFile, and Synkro.

Interface of ToDoPlus is very simple, all the important options are contained in the toolbar at the top of the application. In that thin line of icons you have everything that you need to create very complex task lists, starting with the first option, create new file. Each task or a project will be saved as a file. That’s how you can password protect task lists. Select to add a password to a certain to-do file, and then next time when someone opens the task list they will obviously need the password.

Creating task lists is very easy with this task management software, as soon as you launch the application for the first time, a task list will be opened. The title in the yellow, on the image above, is the name of the document with tasks, where you can start creating your own to-do list.

How to Manage Tasks and Projects With ToDoPlus:

First step that you need to do can already be seen on the image above. Click on the text in yellow and change the title to something that is a bit more descriptive for the tasks that you’re going to add in this to-do list.

On the image above we have renamed the task list and added new tasks by selecting the blue buttons with plus signs from the top menu, the ones that are in the red square on the image above. All three of these are for creating new tasks, only they either place them before, after or as a sub-task of tasks which already exists in the list.

Now we have added sub-tasks to one of the tasks, to further elaborate how to complete the parent task. We’ve also placed check marks on items that we have already completed. Stars are used to mark tasks which are more important. These markers can then later on be used to purge the list of completed or un-important tasks using the buttons located all the way at the end of the toolbar.

Created task files can be password protected, click the Lock icon in the upper right corner, and save. After that send the document to team members which are working on a project, or just run you own personal task and to-do list, ToDoPlus does everything rather well. Download ToDoPlus for free.