AIM Blast is a new feature introduced by AOL which allows you to setup groups of your AIM contacts to which you can then send mass instant messages. Everyone who’s a member of the group can then reply to you or the entire group, so that everyone can see what’s posted. To use this feature you of course have to have an AOL account and you have to create a group on the AIM website. Mass instant messages are sent out through either the AIM desktop chat client or the web based chat client that opens inside the web browser. 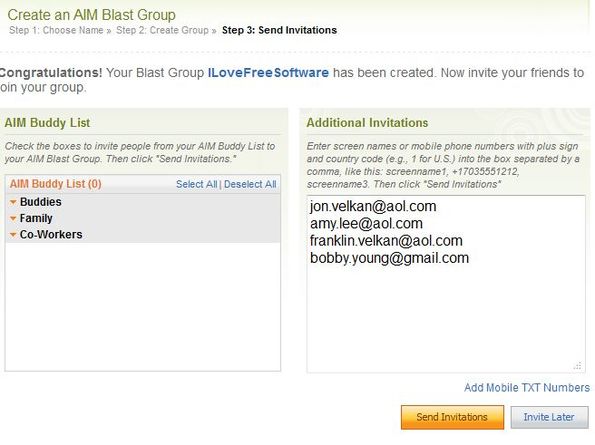 Last step of the group setup can be seen on the image above. This is where you need to add members to your Blast group. Members are invited and they have to confirm the invitation before they’ll be able to receive mass instant messages from you.

Key features of AIM Blast are:

Only AIM contacts can be invited, by adding their IDs. We tried to add a Gmail ID, to see if others can join the blast group that we have created, but invite wasn’t sent out. Here’s a few pointers to help you get started.

Click on the AIM Blast homepage link that we gave down below and from the Getting Started windows click on either the TXT Blast Group or IM Blast group depending on what kind of group you’d like to setup. 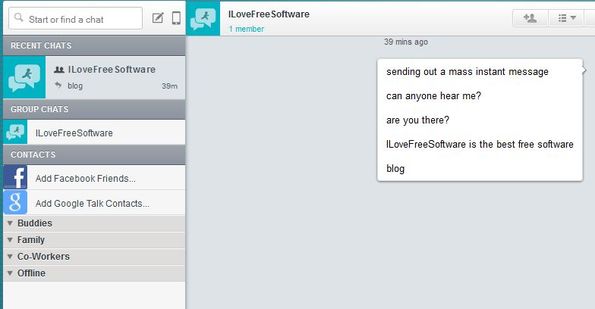 Setup is very simple, you get a three step wizard where you need to type in a group name, change settings, who can join and how (for example) and in the third and last step you need to invite contacts, see first image from the top. After that, login to AIM Instant Messenger, the web based one or the desktop version of it. You should see created group somewhere, click on it, type your message and hit Enter. It will be sent out to everyone in the group.

AIM Blast works as advertised. It’s a great way how you can quickly notify your friends that you’re preparing a party or if you manage support groups of some kind, tell you members about the time and place of the meeting. Register for free.