Uncyclopedia is a satirical website, which is basically a spoof of Wikipedia. Uncyclopedia is disguised as an online database of hilarious and rib tickling (and of course, not genuine) articles that’ll have you in splits.

I’m sure you’d never believe if I told you that Titanic sunk because of Godzilla, or Abraham Lincoln ended the slavery by saving the onions at American Civil War? Well, apparently, according to Uncyclopedia, those are the facts. And these are just some of the gems that you’ll find on “The Uncyclopedia” . 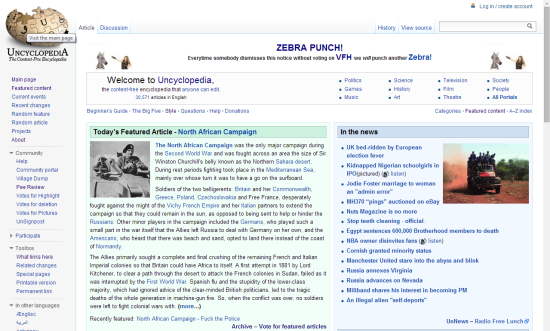 The logo of the website is a hollow potato which according to them, symbolizes softness and dead Irishmen. The website style’s itself, as a “content-free encyclopedia” which is parody of Wikipedia’s “free encyclopedia”. The website was created in the year 2005, and has over 30,000 pages of English content. The style of humor ranges from simple satire, to the kind of humor that may offend others.

Many of the articles in Uncyclopedia contain link to Wikipedia with a typical caption that reads “ For those without comic taste, the so called experts at Wikipedia think they have an article about”.

If we talk about the interface, then Uncyclopedia can be said as a mirrored image of Wikipedia. The only difference is that the person on the other side of the mirror is rather hilarious. The website averts listing of real facts whatsoever, and encourages to humor it’s readers with utter nonsense. The nonsense is, however, fun to read.

The website even allows you to add your crazy imaginations and facts to the articles that are on the website. If you want to add something of your own to any article or celebrity etc..then you are free to do that. There are the website moderators who will cross check your editing to make sure that it’s hilarious enough  before publishing it.

You would also love these websites to get Funny status updates for Facebook, and even more you would love is this website to create fake Facebook wall posts.

Punch A Zebra: There is this one feature of this website that did not seem like the parody of Wikipedia. The website has a notice on every page of its article that  says “Everytime somebody dismisses this notice without punching on VFH, we will punch another Zebra”.

VFH stands for Votes for Highlighted Page. There is a list of certain articles which they want you to vote for. And if you don’t, they will punch a Zebra (How insane is that? I am sure PETA won’t appreciate this.)

The Pee Review: All of us know that Wikipedia has an article reviewing service called “Peer Review”. Uncyclopedia has managed to even parody that by the name “The Pee Review”.

Hilarious and Creative Pictures: Website uses images that completements the text. Some images are such that, even if you don’t read the article and just go through the images, you will be going ROFL.

Other Pranks: Some of the sarcasms are on the entire website, while some of them are on the main page. Uncyclopedia has taken the tiles of the pages on wikipedia and has humored them down in their own styles, like:

Inspite of all the parodies, wikipedia is still going “Facts” about Uncyclopedia in their Wikipedia page, while Uncyclopedia continues to make fun of them on their Uncyclopedia page.

Uncyclopedia while trying to be hilarious, has even offended many. The articles posted on Uncyclopedia about: King’s College, Northwest Evening Mail, generated controversies. In January 2008, the Malaysian Internal Security Ministry asked the editor’s of the newspaper, not to trust Uncyclopedia.

Regardless of whatever controversies and criticism the website had to take, it is still continuing the noble work of adding an angle of humor to every good or bad news that is out there.

There are many stressing news out there in this stressful world, that even if we do not want to, we will have to hear. In such a situation, Uncyclopedia takes those disturbances a bit off your shoulders. After going through a few articles on the website in the past few days, I am in love with the style and the humor that it has chosen. Hit the link provided below and check it out yourselves.

Note: Sit on a bed while reading the articles on Uncyclopedia, you might fall off the chair.