Buffer is a free Chrome extension for Twitter that lets you easily tweet any web page on Twitter. That was a pretty simplistic description of Buffer, but it is actually much more. It is in fact unlike any other Twitter client for Chrome that we have come across till now.

Buffer lets you set the time slot during which you want to send tweets. For example, you might choose to send tweets between 7AM and 10 PM only. After that, whenever you choose to send a tweet with Buffer, it actually gets added to your free Buffer account, and is sent during the scheduled time. For example, if you add a tweet at 5 AM, it will be stored in Buffer, and will be sent after 7 AM. 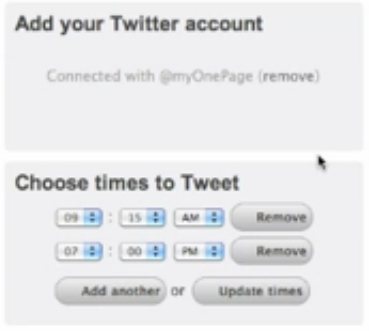 Buffer installs as a Chrome extension. Whenever you are on any web page, just click on Buffer icon, and it will add a shortened URL of that web page to your tweet. You can choose to edit Tweet. That tweet will then be added to your Buffer account. Similarly, you can also select any text on a web page and click on Buffer icon in Chrome, and that text along with URL of that web page will be added to your tweet. In this manner, you can keep adding tweets to your account, without worrying about finding the correct time to tweet them. Buffer will automatically tweet them during your scheduled time.

Here is a quick video overview of Buffer:

We have already covered many apps that let you schedule tweets, but Buffer takes the pain out of individually scheduling tweets. Just setup the time during which you want to tweet, and Buffer takes care of the rest. Love it!