Here’s a list of 5 flash decompiler software for Windows 10 which can be used to decompile SWF flash files. Decompiling gives you access to all the content contained within an SWF file, including photos, audio, video and code. With them you can take SWFs where there’s an interesting graphic, video clip or something else along these lines and extract them out. It can also be used to take a look at the code of a certain SWF file.

Let’s look at these flash decompiler software below. 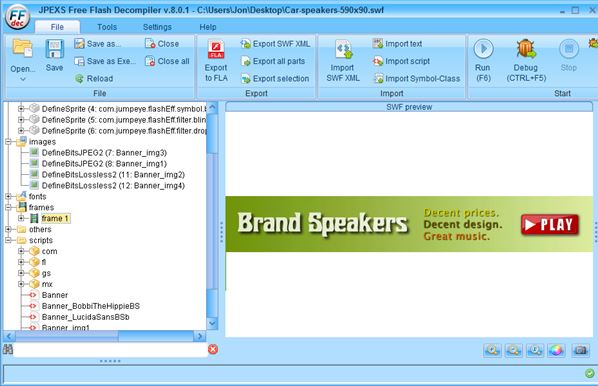 JPEXS Free Flash Decompiler is a cross platform flash decompiler software for Windows 10. Versions are also available for Mac and Linux. UI design follows the same design found in Office 2007/2010. We’re talking ribbon toolbar up top. Left sidebar for listing SWF resources and on the right is the preview area where said resources can be previewed.

Next to SWFs, application also supports GFX, SWC and ZIP. After launching it, to load up a file click on the “Open” icon from the toolbar up top. After a scan (scan duration depends on the size of the file) detected images, videos, fonts, sprites, scripts and other included resources are going to be listed in the sidebar on the left. Decompiled resources can be exported one by one, or you can export them all at once. Other features include support for light editing, debugging and more. 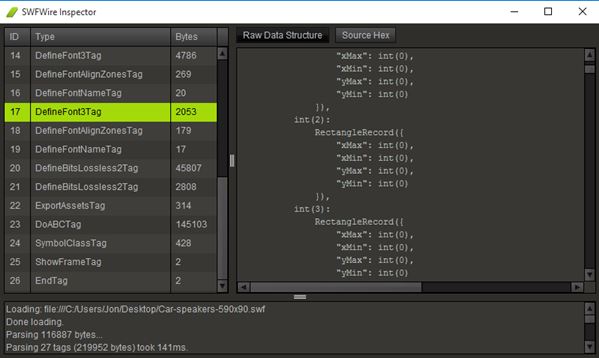 SWFWire is actually a set of 3 different flash decompiler software for Windows 10. You get SWF Inspector, Decompiler and Debugger. These are Adobe Air applications, so you will need to install Adobe Air before being able to use the applications.

Usage is pretty straightforward. Just run the application and drag/drop the file that you’d like to have decompiled. On the image above I have the SWF Inspector running. Interface layout is similar to JPEXS Free Flash, but there are some some differences. For example, here there’s no menu bar up top. Left sidebar is there, with a list of available resources. Rest of the interface on the right is there for previewing selected resource. Simple and to the point.

Also, have a look at 5 Free Video to Flash Converter Software. 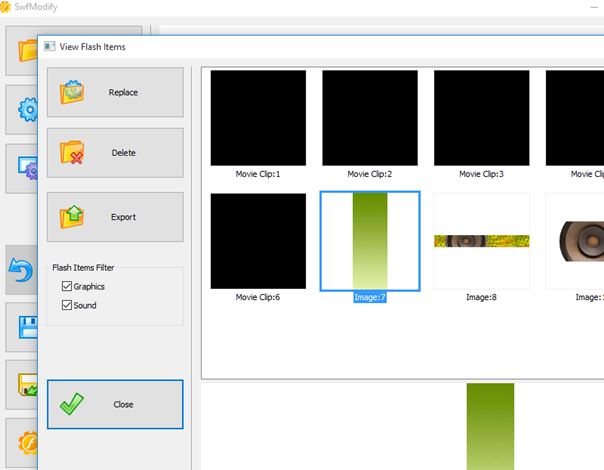 SwfModify is a very easy to use flash decompiler software for Windows 10. It’s a nice cross between JPEXS and SWFWire. When you load a SWF into the application you can start decompiling it using two methods, but only one of them worked for me.

After loading the SWF you’ll see a player that plays the selected animation. First method of how you can decompile a flash file is by starting export of a particular frame. While the SWF is playing simply click on the “Modify (Current Frame)” option. Unfortunately this didn’t work for me. What did work is the “Modify (All Frames)” option, which decompiles the entire animation at once. SwfModify only decompiles media (graphics and audio), you can’t view the code. Only SWF files are supported. 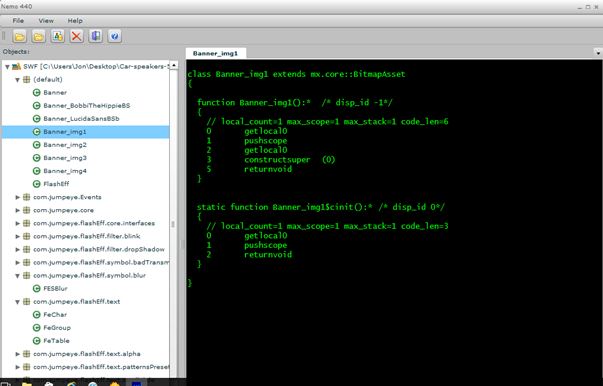 Nemo 440 is a flash decompile software for Windows which focuses on code. SwfModify focuses on media, whereas Nemo 440 can be used for decompiling and browsing code of a SWF file (ActionScript).

SWFs are not the only ones that are supported. SWC and ABC files are also supported. Another thing worth mentioning is that Nemo 440 can open local files (Open files) and also files hosted online (Open URL). Left sidebar will display a list of ActionScript functions found in the opened file. Selecting one will open its contents in the viewer on the right. Note that this just lets you open up and view/export code. Editing is not supported.

Also, have a look at 3 Web Banner Creator Software For Windows 10. 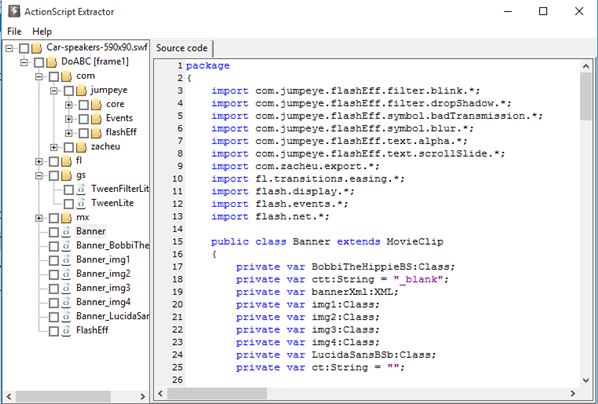 There is no need to install it. When you run it to decompile a SWF just load it up by selecting “File >> New”. Layout is the usual. Left sidebar has a list of resources available in the SWF. Clicking on a resource will open it up in the preview area on the right. Only export is supported. Entire app is less than 1MB which is quite impressive.

SwfModify is perfect for when you need to export media out of flash because it’s easy to use, and it gets the job done very well. JPEXS Free Flash Decompiler on the other hand can be used to export media, view code, and even debug. If you need a more advanced flash decompiler software for Windows 10, then definitely have a look at JPEXS Free Flash Decompiler. ActionScript Extractor is perfect when you just need to browse the code. Let me know what you think, which decompiler is best, by leaving a comment down below.