Tornado Time is a crazy free game for Android users. It’s actually quite bad ass, where you get to destroy the houses and settlements with tornadoes (you read that right, tornadoes!). The game essentially requires you to destroy as much stuff as you can with the tornadoes. The more havoc you wreak, the more points you earn. The game is free, but there is also a paid version of this game that promises you much more fun.

The game is pretty light at around 15 MB. Installation is a standard affair as well, and doesn’t require any accounts etc. You create the tornadoes by tapping your fingers on the screen, and the game allows you to create a total of 5 twisters. Once you use up all of them, the game ends. There’s one more thing to the game: the game does not allow you to exit in the middle of the game. There is no exit option in the game, which is a bit absurd. 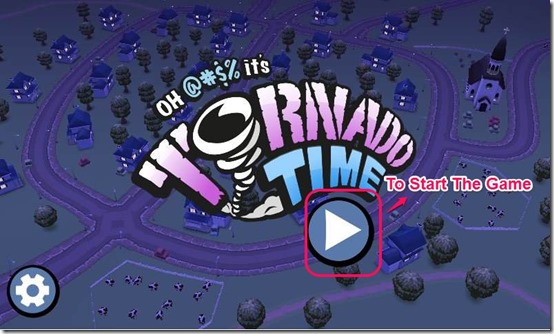 Frankly speaking, it’s one of those games, that you just play for the fun of it and not to complete any complicated missions. It’s simple, and fun.

Also check out these free fighting games for your Android.

How to Play Tornadoes Time on Android

The UI is pretty simple. To start the game, all you have to do is tap on the play icon on the screen. A settings icon at the bottom left lets you tweak the game settings.

The controls are extremely simple as well. All you have to do is create a pattern by swiping your finger on the screen. Once you complete the pattern, the tornadoes move around in that, destroying anything that comes in their path.

Let’s see how to play the game.

Step 1: Install the game and launch it. Tap the play icon to start the game.

Step 2: As soon as the game starts, random messages start appearing on the screen, reminding you of your mission to wreak as much havoc as possible. Tap on the messages once to dismiss them. 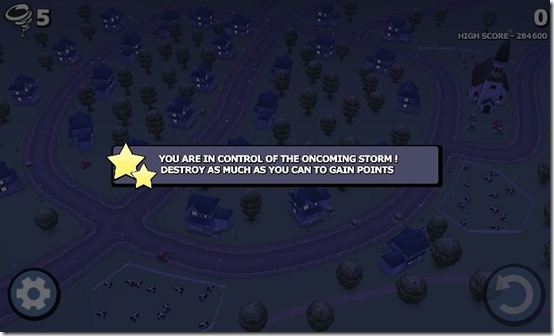 Step 3: As explained above, just swipe your finger over the screen to generate a pattern, and let the tornadoes work their magic. You get to do this a total of 5 times (as there are 5 tornadoes in total to be used). 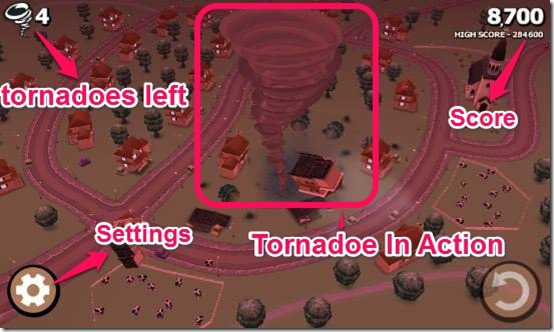 When you end up using all the tornadoes, the game ends, and your score’s presented on the screen. You get extra bonus points for creating clever patterns too. 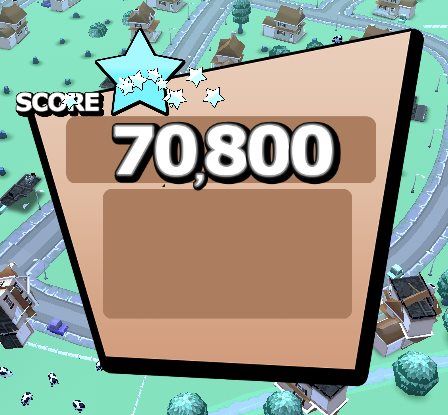 That’s all to it, now just install the game on your Android phone and let all hell break loose!

The game might be simple, but it’s quite addictive. I think if you’re having some spare time at your hands to kill, Tornadoes time might be just what you need. I rate this game as “Good”.