Lansweeper is a free network monitoring tool which LAN administrators can use in order to keep track on the statuses of computers in the local networks that they are assigned to administer. Both software and hardware can be checked with Lansweeper, everything from failing hardware to license statuses of the software which is used by the computer connected in the local area network, all of these can be monitored and administered by Lansweeper. 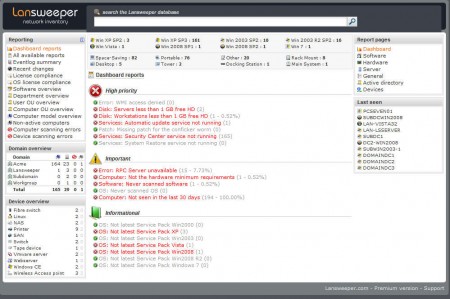 Note that using Lansweeper might be a little bit to overwhelming to those who aren’t familiar with at least some of the network and system administration basics. Installation was the first sign of that fact because we needed to install Microsoft SQL Server, it’s required by Lansweeper, and information about the network where you plan on using this device monitoring tool has to be entered, so you’ll need to know what you’re doing. Once that everything is configured, you should be able to see the main interface, which can be seen on the image above. Some of the more interesting features found in free version of Lansweeper are:

Next to the free version there are also paid versions of Lansweeper, which can be used to generate more reports, monitor several network domains, the kind of features that larger companies need. Free version of Lansweeper should be more than enough for smaller companies or personal use if you require such network device monitoring software.

How to monitor and keep track of network devices with Lansweeper

Lansweeper is a browser based tool which means once you install the main application you’ll gonna have to open up your browser and access the location towards which the install wizard pointed you. 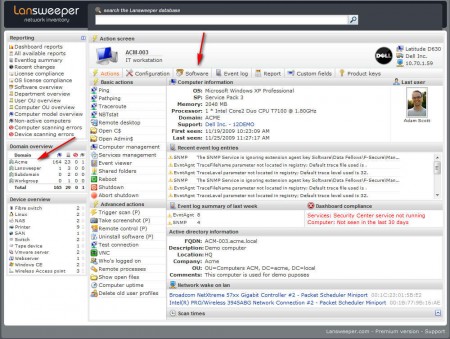 By clicking on a domain name in the Domain overview window in the left sidebar you’ll be presented with a list of devices which are residing within that domain. By clicking on a device name, you’ll activate the Action screen for that device. Numerous options are available here, as you can see from the image above. You can check reports, change configuration, open up event logs, make sure that the product keys are operational, reboot or turn off the system and multitude of other manipulations. 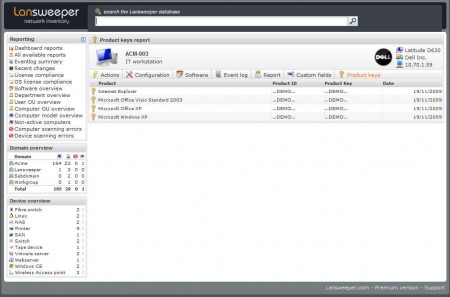 What you see on the image above is the product key report where you can see if keys are still valid for commercial software installed on the network computers.