Here’s a list of 3 IE tab extensions for Google Chrome which you can use to load up a web page using Internet Explorer’s web page rendering engine. What this allows you to do is see how exactly a certain website would look like if it were actually loaded using Internet Explorer, only instead of having to open up IE, you simply load a new tab. This functionality will come in handy for web developers, for testing purposes, because it’s a known fact that not every web browser renders web pages the same, IE in particular is problematic, so troubleshooting and testing is needed for achieving cross browser compatibility. 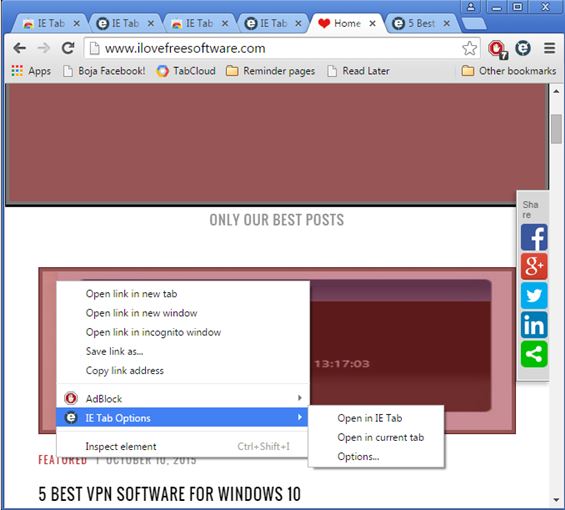 IE Tab is an IE tab extension for Chrome that lets you load up web pages using rendering engines of every IE version starting with Internet Explorer 7. The only requirement that the extension has is that you have the IE version you want to use actually installed on your PC. Note that only Windows is supported by this extension.

Extension has inclusion and exclusion lists that allow you to automatically reload websites and web pages using IE Tab once you visit them. Alternatively you can use right click and the “Open in IE tab” option to load up extensions using the IE tab.

Also, have a look at 4 Free Cross Browser Testing Tools to Test Website in Multiple Browsers. 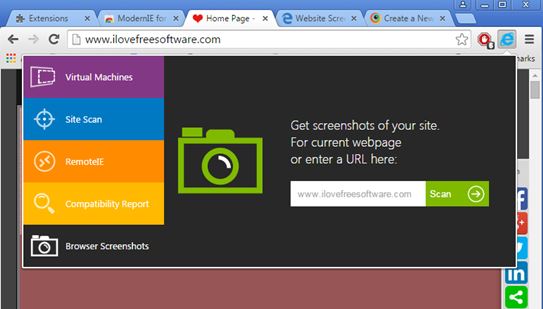 With this extension you get a large selection of tools for testing cross browser compatibility, including a browser screenshot tool which will load screenshots of website rendered with different rendering engines in a new tab. All versions of IE are supported, including Internet Explorer 6. Screenshots from Firefox, Chrome, Safari, Opera, Android Browser and iOS Browser and are also going to be displayed. Other available tools include a code compatibility scanner, vulnerability scanner and a virtual machine generator (for VirtualBox, for example). Small drawback of ModernIE is that it worked a bit slow to me, but you might have better luck with it.

Get ModernIE for Web Compatibility Testing. 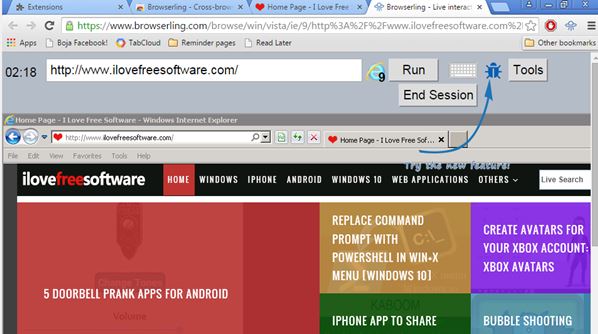 Free version of Browserling is limited to Internet Explorer 9 only, next to all the other major versions of browsers like Chrome, Firefox, Opera and Safari.

Use the top right corner icon to select which browser and which browser version you want to use. Windows versions can also be changed, but the free version of this extension is limited to Windows Vista only. Once you’ve setup everything, left click on the “Run in Browserling” button and it will load the website in the currently active tab in a new tab using the selected IE rendering engine. Rendered web page in the new tab isn’t just a screenshot, it’s interactive, meaning you can click and load new pages within it.

IE Tab and Browserling are my favorites from the list of IE tab extensions above. IE Tab is my go to extension of this type, because it supports lots of different versions of Internet Explorer and rendered pages are interactive. Browserlings comes close behind in second place because it supports other web browsers next to IE and ModernIE comes in last, but it is also quite good. Let me know what you think by leaving a comment down below.