Here’s a list of 5 TED apps for Android which you can use to view and keep track of updates of new video postings from the famous TED conferences. If you happen to be unfamiliar with what TED conferences are, they are events where distinguished and accomplished people have talks on multitude of topics. The talks help people understand our world better, find motivation, learn about science, etc. Browsing TED talks without an app might be a bit of a hassle, that’s why today I decided to checkout what kind of TED talks apps are available in the Play Store. 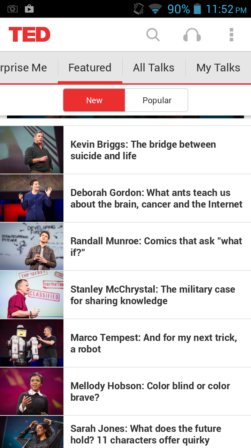 I decided to start the list with the official app created by TED Conferences LLC themselves. So that we have something to compare all the other TED apps available from the Play Store.

App works very well and it’s available in 22 different languages. After running the app, you’ll first see recently published talks, the ones from the homepage. Videos that interest you can be found in several different ways, using a search tool, category view or randomly by tapping on the “surprise me” button. Videos can be played with subtitles, just like you can on the actual website.

Get TED by TED Conferences LLC. 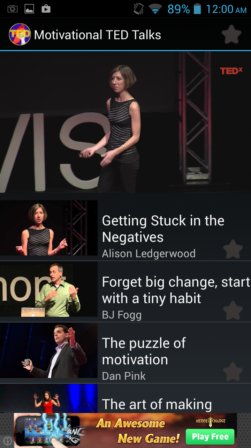 Make sure to also have a look at 10+ Websites To Download Free Inspirational Motivational Posters. 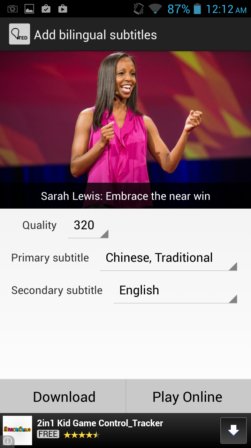 TED with dual subtitles is a special TED app which will allow you to watch two subtitles during TED videos simultaneously.

App requires you have the original TED app and MX Player installed. When you find a video you want to watch, you “share” it to the TED with dual subtitles app. It will then ask you to setup the dual subtitles and video quality (image above), after which the video plays with settings you’ve setup.

Get TED with dual subtitles. 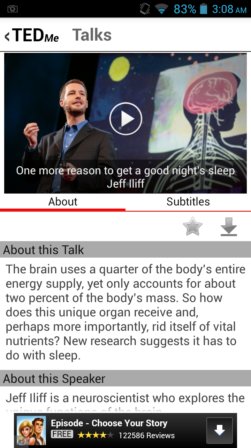 TED Me is a simpler version of the original TED app from the beginning of this list. A third party player is used to play the videos, MePlayer Pro.

There isn’t as many options as there is with the official TED app, but all the important options are more accessible, that’s the best way how to describe TED Me. Video downloads are also available.

Make sure to also have a look at Official TED App For Windows 8 – Download TED Videos Free. 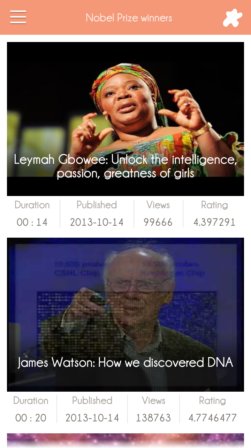 TED – Official Videos is similar to TED Me, only it doesn’t require a third party video player and it doesn’t have as many options.

Videos are divided up into neat categories like “Cool psych experiments”, “Nobel prize winners” and more. Videos are scraped from YouTube, so the subtitles and quality can be configured on the videos themselves.

I like the official TED App the most, but it doesn’t have a huge advantage over all the other apps. They all work great, so if you look for a way how to enjoy TED talks on Android, have a look at apps from the list above.