Booster+ is a free system utility which comes packed with over 15 different system tools that can be used for increasing the speed, security and stability of your Windows computer system. The application is written in Java, so if you do not have the Java runtime environment you will not be able to use it, which is a shame, because there are some very useful tools hidden behind the Booster+ hood. 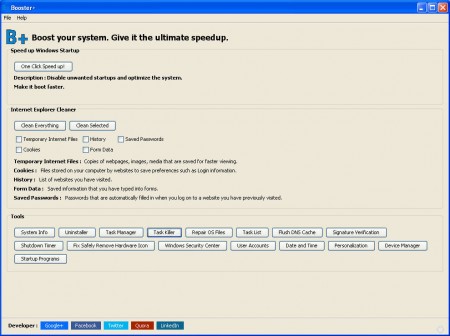 As you can see from the image above, the list of system tools that Booster+ has to offer is quite extensive. At the top we have the One Click Speed Up button where you can activate a complete system scan which will report back any system vulnerabilities that might cause system slowdowns. Bottom of the window contains every tool that Booster has to offer, but note that not every single one of them are Booster’s own tools. Some of the buttons will just open up the corresponding Windows OS tool, form example the Task Manager button will open up the Windows Task Manager. Here’s a short list of the more interesting system utilities which can be very useful:

Even though we mentioned that a lot of the tools with which Booster+ boasts are not its own, to majority of Windows users they will be new, so they might not notice that they are actually built-in system tools which Booster+ calls upon to fix the system. Take Signature Verification tool for example, have you ever heard of it? Do you know what it does? If you have, good for you, if not, read on and find out about Signature Verification and other interesting system tools that Booster+ has to offer.

We mentioned Signature Verification, a tool which will scan system files, compare their status, their description, file size, file signatures, in hopes of detecting malware manipulations:

Viruses have a nasty habit of changing important system files and these changes can be detected since every system file has a seal, which get’s broken in case of tampering.

User tasks and processes can sometimes freeze, especially on older computers. This can cause a lot of problems, mainly that the program which we’re using is no longer responsive, with Task Killer:

You can kill a task of your choosing by force. Simply type in the name of the process and then hit Kill, and you’re done.

Last but not least would be Internet Explorer Cleaner, cleaning tool which can be seen in the middle of the program window. You can clean the entire IE cache with it, cookies, files, history, everything. The DNS Flusher can clear your DNS cache which can sometimes cause problems by making some websites not to open. A lot of other tools are available and with Booster+ you can improve your computer experience with it a lot, try it, it’s free.