Boot-Repair is a free GRUB bootloader management utility which you can use in order to restore GRUB bootloader and fix errors which occur when you have a dual boot system setup of Linux and Windows on the same computer or when you have Ubuntu Linux installed with the Wubi installer, and one of them gets deleted. Most people install Ubuntu to test it out, and when they decide to remove it, that’s when the problems start. 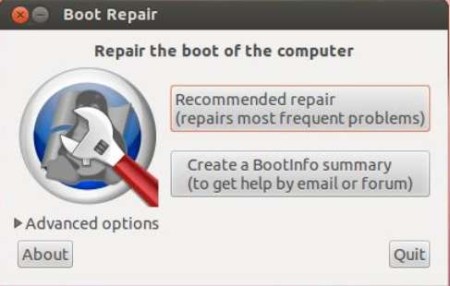 Interface of Boot-Repair can be seen on the image above. This is the default interface which holds two options, of either automatic backup or manual backup where you yourself can go over the settings for the GRUB bootloader before applying changes. Note that this free boot repair utility can repair Windows bootloader also, which needs to be done after you’ve deleted Ubuntu from your computer, after you’ve removed the Ubuntu’s partition. Key features of this free bootloader management utility are:

We mentioned that you can use Boot-Repair for fixing GRUB. For those who don’t know what that is, it’s the bootloader which Linux distributions and some other alternative operating systems use. Officially installation of this free boot repair utility is available only for Ubuntu and you’ll have to run it off of Ubuntu’s Live CD, if we’re talking about repair. Here’s a few pointers to help you get started.

Live CD is how you can install Ubuntu and lots of other Linux distributions for that matter. If you have Ubuntu installed, you’ve probably used it in order to install both the system and GRUB. Most people delete the Ubuntu partition and are left with an error after the computer is restarted. To fix that error, boot off of Ubuntu Live CD and install Boot-Repair by running these commands in the Terminal:

To run Boot-Repair open up System >> Administration and click on its entry there. You should see the menu which can be seen above. Click on the Recommended repair and all the errors will be fixed. To manually fix the problems, click on the Advanced options button. 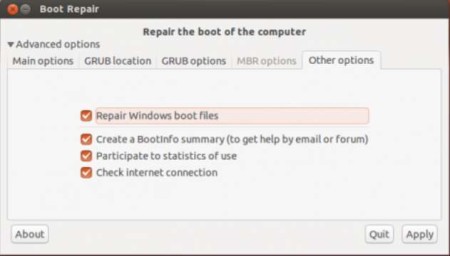 Use the tabs at the top to switch through options. Do this only if you’re sure about what you’re doing. If you’re only modifying GRUB bootloader with Boot-Repair, setting wrong options here might cause damage to your bootloader so be careful.

Boot-Repair will make your life a lot easier, especially if you have decided to drop one of the operating systems that you’ve used in a dual boot setup, either Windows or Linux. Graphical interface means that you won’t have to use the command line, with which users aren’t that pleased most of the time. It’s good for bootloader management also, to tweak GRUB.