Gods Of Rome for Windows 10 is a free battle game app for Windows 10 devices. The game has been designed by Gameloft studios and has some really killer graphics onboard. The game when launched shows you the brief storyline of the game, followed by cut scene videos which have been designed in a very cinematically awesome way. The game is pretty heavy and you might think that passing on it is the right thing to do, but let me tell you that it is totally worth the large download size if you are a fan of one on  one combat games set in the style of Tekken.

Windows 10 version of Gods Of Rome is available for free from the Windows App Store. 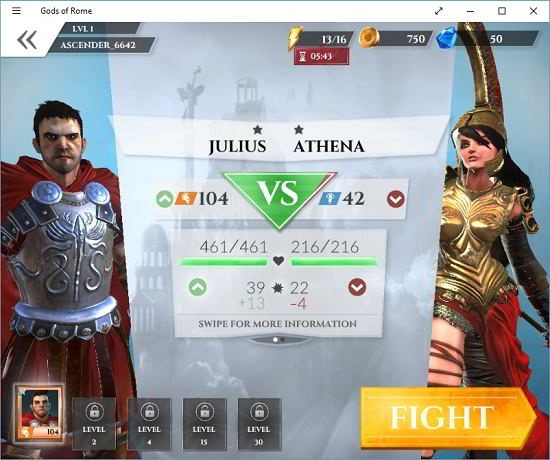 The storyline of Gods of Rome for Windows 10

Gods Of Rome is a free game which is available from the Windows 10 App Store. In the game, you play as the ascender who has to defeat the evil demigod who has obtained the power to summon all the mighty Gods and use them against you. Apart from this evil demigod, you are the only person capable of summoning heroic spirits to use them for battle. You can use heroic spirits like Athena, Zeus etc. to battle the enemies who come along the way. You will win rewards and summon more heroes along the way as you progress through the game.

Gameplay of Gods of Rome for Windows 10

The game is designed in the strategy battle format where every battle takes up energy points. Energy recharges automatically with time. The game has a Quest mode where each battle is fought one by one to progress up the battle ladder.

Salient features of Gods Of Rome

In the game, you have to use the keyboard and mouse to play. You can use the following controls.

To run this game, you will need:

Main features of Gods Of Rome for Windows 10

When you install and run the game on your device, you will be shown the below screen. 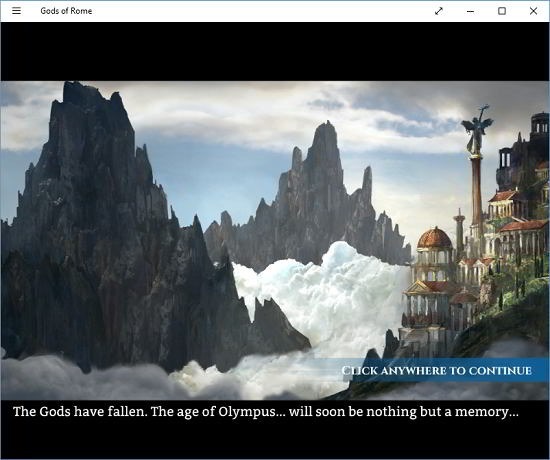 As you can see, the game has amazing cut scene movies which make for a eye candy. To skip the movies, you can click anywhere on the screen to continue as is shown on the bottom right of the screen below. Once in the game, you will be shown the brief tutorial of the game. 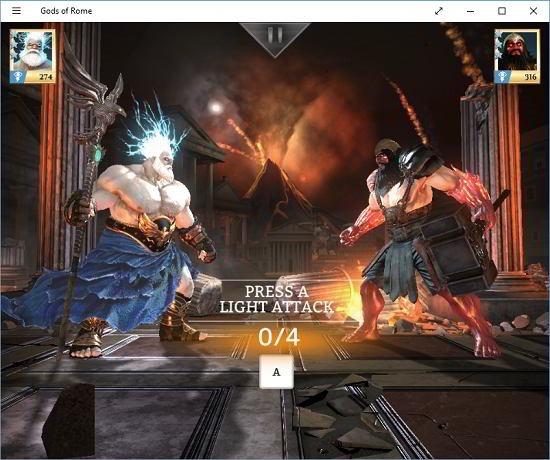 Once the tutorial battle is over, you will be shown a brief introduction to the storyline of the game. This looks like the following. 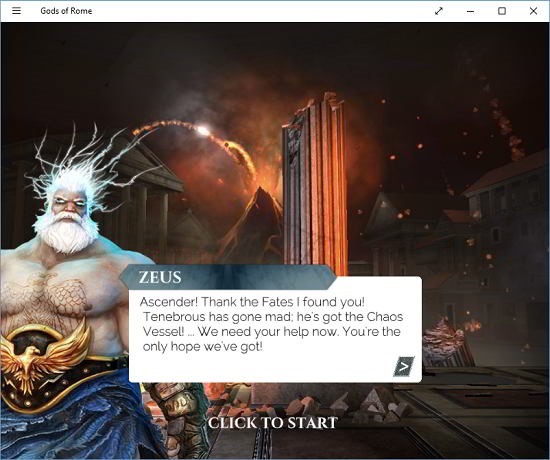 In the loading screens too, you will be occupied as the game will show you various helpful tips. You can see these tips in the bottom of every loading screen. 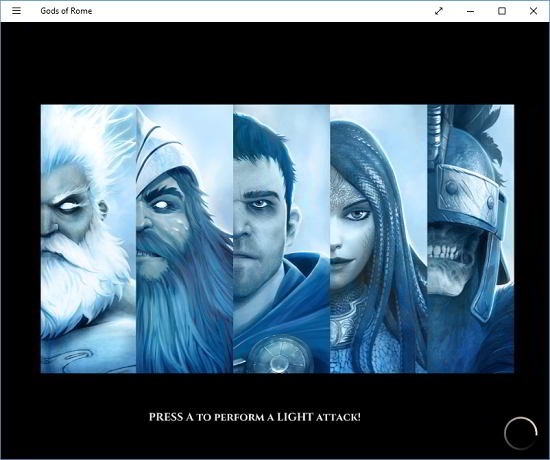 Once all the tutorials are through, you will be taken to the main menu of the game. You can see this in the screenshot below. 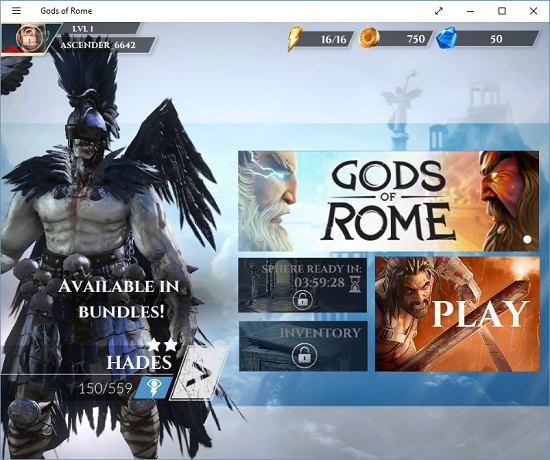 Use the Play button in the main menu to be taken to the quest map. 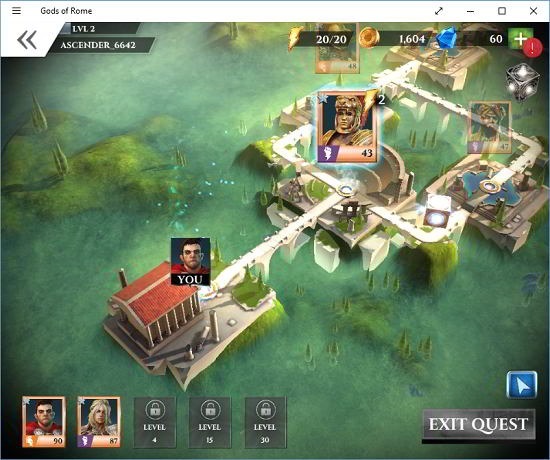 In the quest map, as is shown above, you will be shown your team of fighters at the bottom of the screen and you can commence a fight by clicking on the fighter spots on the map. Inside of this map, you can see your remaining energy points etc at the top of the screen. Once you click on a fighter spot to commence your fight you will be taken to the battleground. 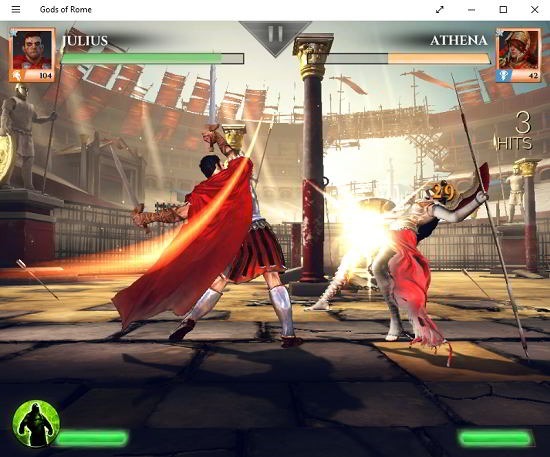 The battleground is shown above and here you can see me battling an opponent. You have to use all the controls that you learnt in the tutorial to the game in the battleground in the proper order in order to win the battle. Your player will always be on the left side, the opponent being on the right. On emerging victorious in a battle, you are shown your victory rewards in an interface that resembles the screenshot below. As I had leveled up with my victory, I was shown the level up prompt instead, in either case, you will attain certain rewards on your victory. 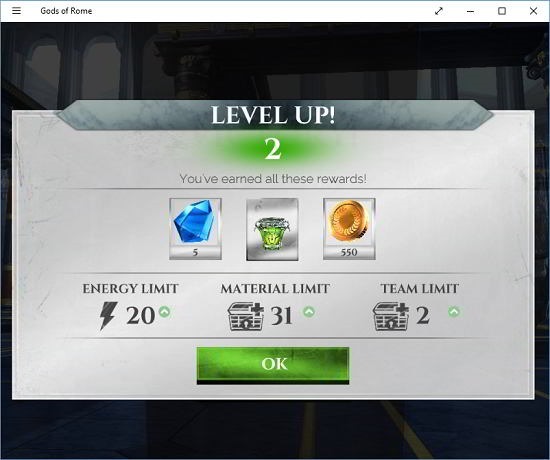 The battles when completed in each quest will award you with a soul sphere which can be opened in the temple of souls accessible in the game map. The sphere may contain new heroes for your team or gear which help in upgrading the skills of your players.

With this, we wrap up the main feature set of Gods Of Rome for Windows 10 devices.

Pros of Gods Of Rome

Cons of Gods Of Rome

Gods Of Rome for Windows 10 is a great game by Gameloft Studios which makes for an amazing download on your device. The only place where it loses points is its large size which is a big turn off. Overall, everything about this game is likeable and I would have no problems with rating this game a glorious 4.5 out of 5.

Get Gods Of Rome for Windows 10.