RealPlayer has been with us for a long time, which is no surprise considering how powerful this media player is. With years it has been advancing and today it has come to a point where next to its basic function of a media player, it also offers the possibility of connecting to everyone’s favorite social network, Facebook, to gather and show videos that are being shared on the Facebook timeline by your friends. 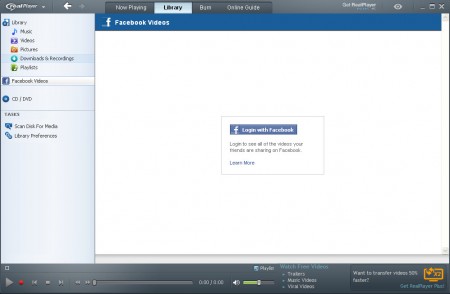 Facebook video browsing via RealPlayer is something that has been introduced into the latest version of this application, and you are gonna have to update it if you haven’t already to actually use it on your installation of RealPlayer.

After you’ve updated RealPlayer to its latest version, you should be able to connect with Facebook in order to receive videos that were posted by your friends. To do that you are gonna have to open up the Library tab that can be found at the top of RealPlayer window. Library is usually used for opening up media files which are stored locally, but now, with the latest RealPlayer, an option for Facebook Videos has been added to the list on the left, right below the usual Music, Videos and Pictures options: 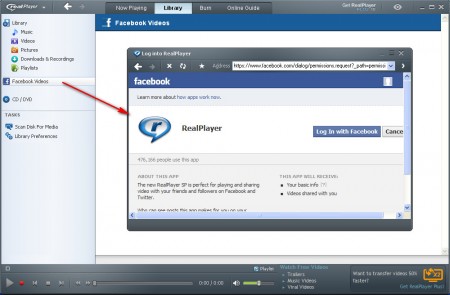 Clicking on the Facebook Videos option in the menu will open up the Facebook login window in the RealPlayer browser window on the right, as you can see on the image above. Here you are gonna have to enter your Facebook username and password, and agree to information sharing with RealPlayer. There’s no other way around this, and if you are not too comfortable sharing Facebook info with third party apps, you’ll not be able to use this feature of RealPlayer. Once that you agree on everything that there is to agree on, and after you’ve successfully connected to Facebook via RealPlayer, hopefully you won’t see something like this: 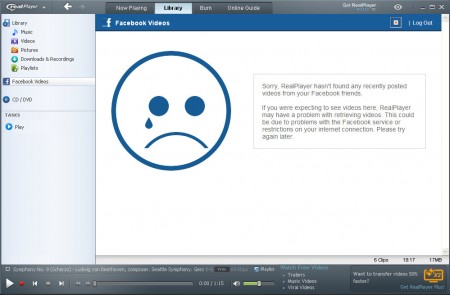 Basically where the warning about there not being any videos to display you should see a grid of videos which were retrieved by RealPlayer from your Facebook feed. If there are no videos for the program can retrieve or if there is a problem with the Facebook service, you will get the message above.

RealPlayer doesn’t only offer video watching, you can also:

RealPlayer comes with a lot of different options for watching videos, listening music and browsing images locally and now with the addition of Facebook Videos checking, it seems that RealPlayer is another application which is joining the social revolution.

So far only Facebook is supported, who knows maybe other websites might become available in RealPlayer, other social networks that is, and we can start keeping track of our friends videos on them also with the help of RealPlayer. Internet Explorer is needed for RealPlayer Facebook Videos browsing to work, and it has to be a newer version, so make sure to upgrade before testing out this cool new feature that RealPlayer offers.