ZombieBooth 2 is a very impressive zombie photo app. It’s so good that it even startled me a little bit once that image processing was complete and I was given the “zombiefied” image which can be seen down below. 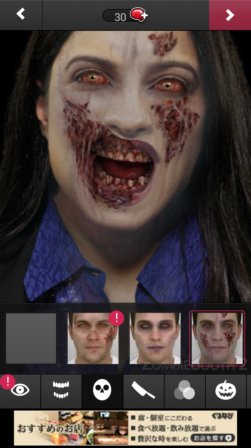 The reason why I was startled is because the app automatically created an animated character out of the image I gave it. Animated character with sound effects. When you for example tap on the screen it will do the usual zombie roar. Zombie effects can be tweaked using the toolbar at the bottom. App lets you load images from the gallery and it also has a built-in camera app for taking new photos using the phones camera. Tap on the green arrow in the top right corner to create a still image that can then be shared. 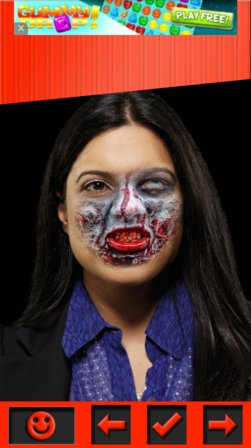 For example you will need to adjust the zombie effect on faces of people, and the effects aren’t as detailed as they are in ZombieBooth 2. About a dozen zombie face effects are available and the created images are static, they aren’t animated. Images for transformation can be taken with the camera or existing ones loaded from the gallery.

Zombie Camera Booth by Bright Light lets you configure each part of the face individually. It has a selection of zombie noses, mouths, eyes, generic wounds and that can be plastered on the faces of people to simulate a zombie effect. 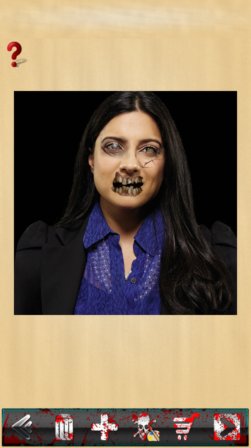 Small drawback of Zombie Camera Booth is that selection of zombie parts is somewhat limited in the free version of the app. Additional packs of effects are available but they need to be paid. Images can be loaded from the gallery, or new ones can be taken with the camera.

Zombie Photo Booth Free by Kaufcom works just like the previously mentioned zombie photo app created by Bright Light, only a it has a different selection of effects and controls a re different. 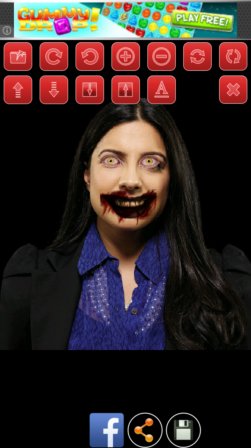 You’re given a gallery of zombie stickers for eyes, noses, mouths, etc., which you can then apply to the images that are loaded into the app. Names of the apps are even the same, but they are different. Here you control the size and rotation of the zombie effect sticker using controls from the toolbar at the top, for example. In Zombie Camera Booth by Bright Light this is done with the usual tap, pinch, double tap, etc.

If you liked the first app from this list, ZombieBooth 2, and would like to have more of the same, then ZombieBooth is for you. 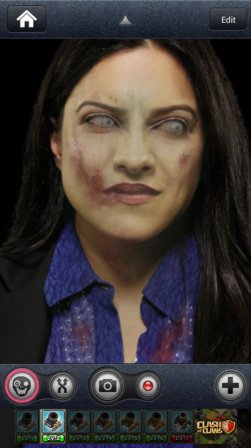 This is just the previous version of the app, but it has the same 3D animated zombie effects. Animated zombies are created automatically with sound effects, and images used for zombification can be loaded from the gallery or new ones can be created with the camera.

My favorites from the list above are the ZombieBooth apps, both version 1 and 2. Close behind is Zombie Photo Booth Free by Kaufcom. Let me know what your favorites are in comments down below.