ZombieBooth 2 is a free 3D animated zombie app for Android. You can easily take your photos and transform them to 3D animated zombies, in just few minutes. It offers you realistic special effects, along with multiple zombie parts that you can add to your images to create scary zombie effects. The sound effects offered by this application also creates a scary environment. You can easily share your zombie on various social networks, and scare everyone with your scary avatar. 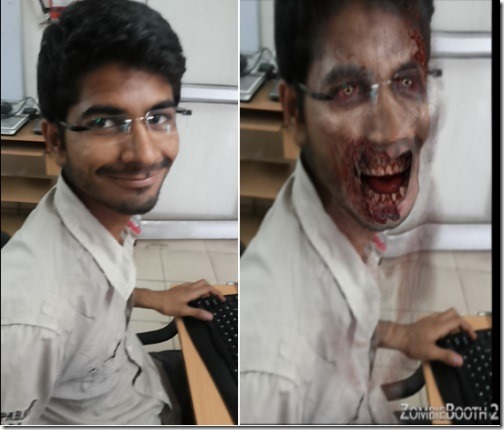 The best part of this 3D animated zombie transforming app for Android is that it offers realistic kind of zombie behavior, as seems as if the zombie is breathing, eating flesh, etc. However, the animated effects can be seen within the app only. When you export the photo from app, it just exports zombie image (as in above screenshot on right side), instead of animated gif with animations.

The disadvantage with this app is that it adds a watermark at the bottom of the image.

The app is ad supported, and ads are displayed at the bottom of the screen (unlike Sniper Hero, which shows full screen ads).

How To Add Zombie Effects to Photos on Android

You can install this app from link available at the end of this review. Once installed, start making some really scary zombie photos. 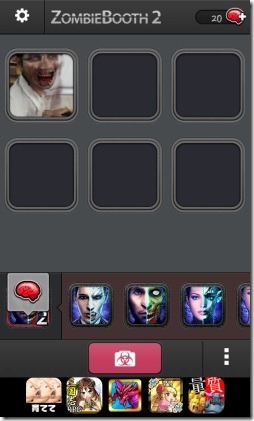 You can click on the Red button located at the bottom to start creating scary zombie. You can opt to take photo using your camera, or at the same time import images from Facebook. Well in my case, I opted to take a photo from my phone camera.

You can capture the photo in such a way that your face comes within the face outline. As soon as you click the photo from your phone, it quickly redirects you to the screen where it offers you multiple scary zombie parts, like: eyes, bloody teeth, distorted face structure, and many other effects, to create  a perfect scary one. 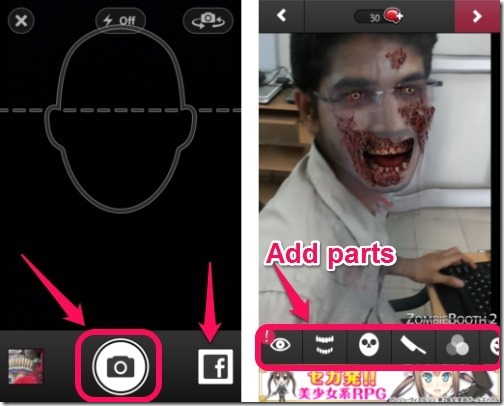 As you keep on adding parts to zombie, the sound effects simultaneously behave the same way.  Like, if you add distorted blood filled mouth, growling sound effects appears as if the zombie is aggressively waiting to eat your flesh. 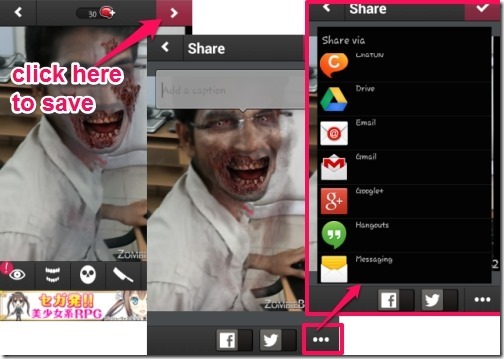 From the main interface you can easily share or delete your zombie. It offers you only one customization option, that you can use to save the original photo. 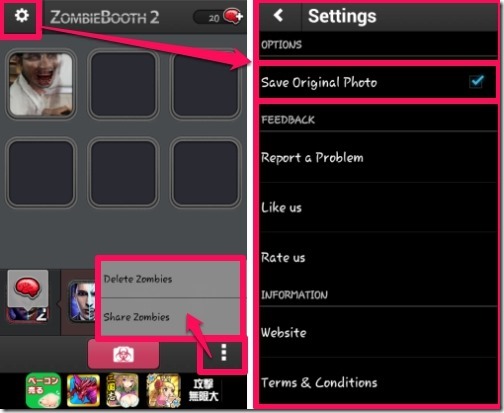 Feature Of this ZombieBooth 2 for Android:

ZombieBooth 2 is indeed a very intersecting application that lets you create scary 3D animated zombie effects, in few clicks. Watermarking feature and ad display definitely adds a minus point to this app. Despite of these flaws, I would recommend you to use it as it give you stunning sounds effects with 3D animated zombie.

Get ZombieBooth 2 for Anrdoid here, or simply scan the QR code below.