Here’s a list of 5 bloatware removal software for Windows 10. Bloatware is term used to describe all those additional applications that manufacturers install on desktops and laptops before shipping them out. It’s not just that these applications are a nuisance and performance killers, they can also be a threat to security. Windows 10 Bloatware Removal tools from the list down below will help you get rid of these applications for improved performance and better security.

The PC Decrapifier is a portable bloatware removal software for Windows 10 which scans the applications installed on your computer and puts them in three categories: Recommended, Questionable, and Everything Else. 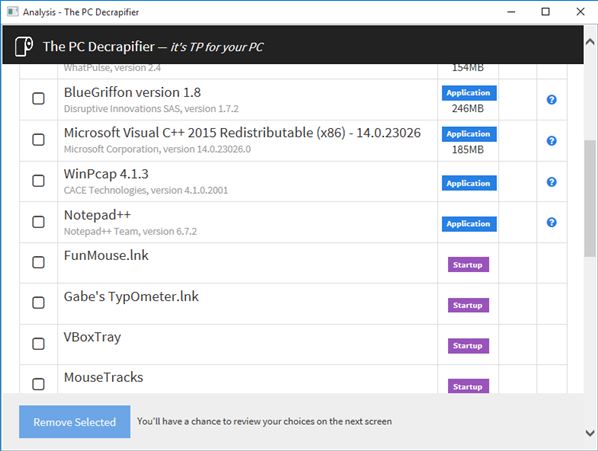 The ones in the Recommended should be removed, as they are known bloatware that only costs you valuable resources. Everything Else lists all the applications that aren’t found in the PC Decrapifiers database. These are probably applications installed by the user, so they should stay. Applications that are Questionable fall somewhere in between, it’s up to you if you want to remove them, but make sure to Google them before initiating removal so you don’t uninstall something important. The PC Decrapifier will guide you through the uninstallation.

Decrap My Computer is another bloatware removal tool for Windows 10 that works as a wizard where the first step is to scan all the installed applications on a PC, same as The PC Decrapifier.

Once that’s done, applications are going to be listed into categories like Windows related software, third party software, startup items, etc. Everything listed in the “third party software” category that you don’t need can basically be deleted. Put check marks next to unwanted entries and move on to the next step where the application guides you through the uninstall process by offering to create backups, asks for additional confirmation, etc.

Also have a look at Bloatware Removal Utility to Delete Multiple Programs At Once: Decrap.

PC Decrapifier is a portable bloatware removal software for Windows 10, which is small, compact and works as a wizard, similarly to how Decrap My Computer does.

PC Decrapifier has its own database of known bloatware apps, and it will list them if they are detected on your computer. If no bloatware is detected, list of all the applications installed on your system is going to be shown. Put check marks next to entries you want to remove and then click Next. This will start the uninstall process for the selected applications. Small drawback of PC Decrapifier is that it doesn’t single out Windows components and drivers so there’s an increased risk that you remove something important. Be careful.

Should I Remove It

Should I Remove It is technically speaking not a bloatware removal software, but it’s nice to have next to the previously mentioned applications. 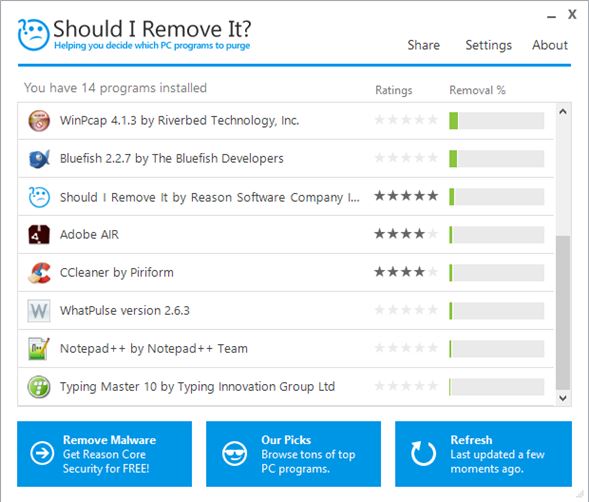 Should I Remove It will analyze applications on your Windows 10 PC and tell you which one of them are useful, and which ones are essentially bloatware. After running the application it scans installed software and produces a list with ratings and removal percentage points. The higher the percentage point, the more likely it is that the application is bloatware of some sort. Use this application alongside PC Decrapifier, for example, to find out what to uninstall and what not to mess around with.

Get Should I Remove It.

Also have a look at PC Decrapifier: Uninstall Multiple Programs Together. 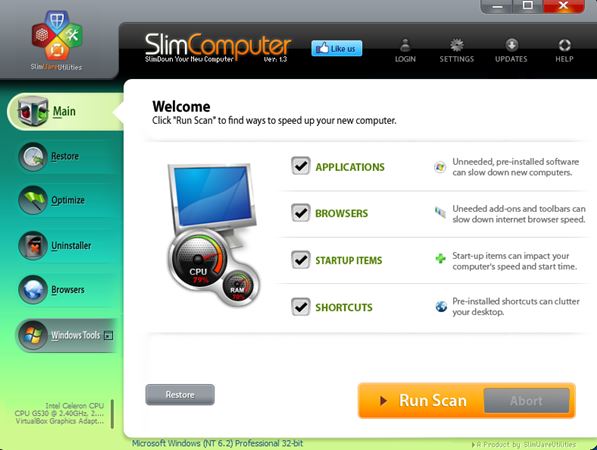 After the scan is completed you’ll be presented with a list of found items and the tools for their removal from the PC. Additional features include application uninstaller, Windows component manager, browser addon manager, PC optimization tool and more.