Here is a list of 5 Best Free Twitter Widgets for Android. These apps allow you to see your Twitter timeline and tweet right from your homescreen. Here you will get to see standalone widgets, and even apps, which come with great widget(s) along with the package. You can easily add scrollable Twitter widgets to your homescreen, and access your Twitter account and all the tweets, Mentions, and replies, without really opening any app.  Scroll down now, to know more!

And by the way, you can also take a look at this post if you want to try out Facebook Widgets instead. 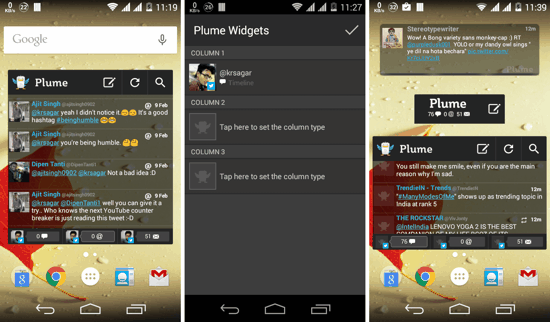 Plume is one of the most popular Twitter apps for Android, and there’s a reason for that. Plume is extremely feature-rich, and even offers several widgets for adding to your homescreen. The Scrollable widget offers great utility as it lets you add different feeds from your Twitter account– be it Timeline, Mentions or DMs. You can even add your Facebook Feed to the same widget in one of the three configurable tabs. Tweeting and Searching is extremely easy as well, since the widget itself has the dedicated buttons for them! Plume is ad-supported and is available for free on the Google Play Store. 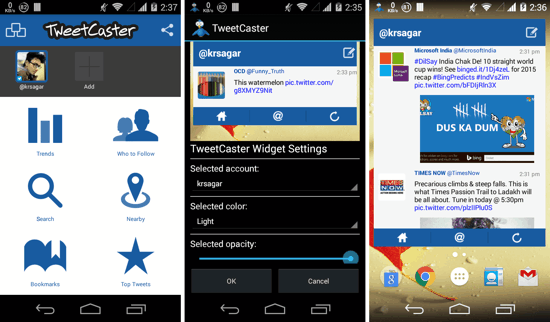 Tweetcaster for Android is a popular Twitter app for the Android platform. You can use Tweetcaster as your primary Twitter app, and even use the widget that comes along with it. The homescreen Twitter widget that comes along with it is quite functional, to say the least. You can edit the Widget appearance when adding it to your homescreen, as is shown in the second screenshot above. Yo will then get a scrollable Twitter widget along with the option to switch between either your home Tweets’ feed or your mentions. There is a button for composing a tweet, and another for manual refresh as well. Tweetcaster is an ad-supported, free Twitter client for Android, and you should go ahead and install it from the Google Play Store now! 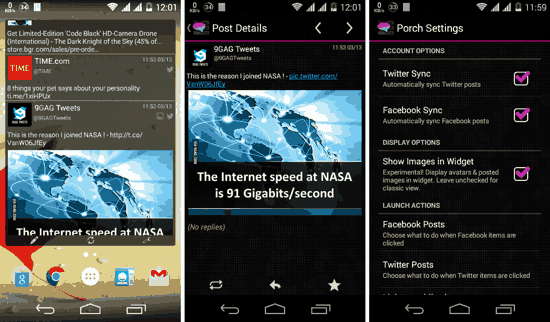 Porch Social Widget let’s you add a large scrollable Twitter widget to your Android homescreen. Porch doesn’t have any standalone app and the widget handles everything that Porch has to offer. You can add your Twitter and Facebook feeds easily to Porch and then access them in a common stream, right on your homescreen. Tap on a tweet, and you will be shown that in detail, and you can choose to Retweet, Reply, or Favorite it. One issue that has been widely reported is that even though it has support for Facebook as well, it doesn’t really works and the app force stops every time that you tap on the Facebook option. But we are talking about Twitter widgets here, aren’t we? And that, works flawlessly. Go on, head over to the Play Store to try it out. 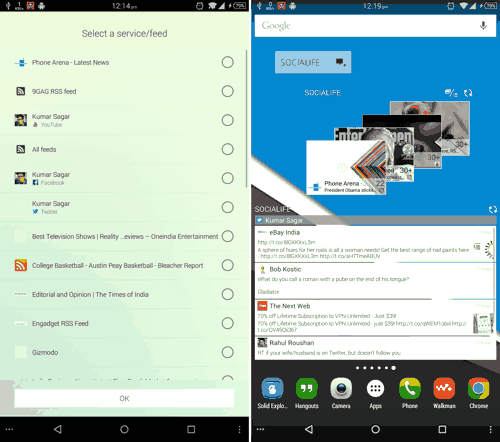 Socialife News is another great app with the option to add scrollable widgets to your homescreen. Socialife is mainly a feeds reader app, which also supports your Social accounts. You can add your Facebook, Twitter Accounts along with YouTube. And, there are various widgets which can be added to the homescreen for showing specific feeds. Adding a Twitter widget too, is easy, and your account can be easily selected from the screen shown in the first screenshot above. Not just that, you can also add a quick post widget to your homescreen, which can be used for Tweeting directly from your homescreen. 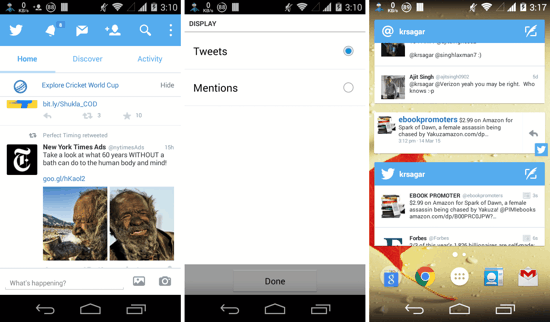 That’s it! You have reached the end of this list of 5 Best Twitter Widgets for Android . You can suggest any other widgets in the comments section below!