And by the way, if you are interested, you can also check out the 5 Best News widgets for Android. 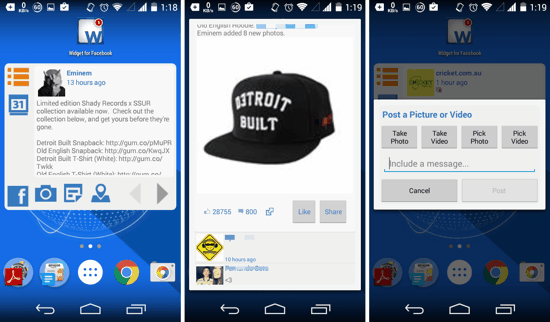 Widget for Facebook is just a standalone widget which lets you access Facebook feeds right from your homescreen. While you don’t get the scrollable feed, you can see one post at a time, and see the next or previous post(s) by tapping on the arrows. You can easily like or comment on a post by opening it (see the 2nd screenshot above). Posting a photo or status to Facebook is extremely easy as well. If you just want a Widget for Facebook, this free widget will suffice. Head on over to the Play Store and get it now! 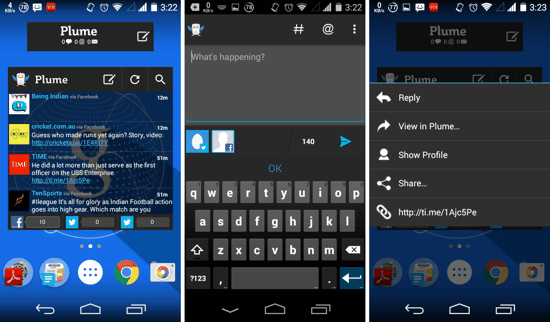 Plume is one of the most popular Twitter clients. But Plume can handle your Facebook account as well, and that’s exactly where the scrollable widget comes handy. After adding your Facebook account to Plume, add the widget to your homescreen. Before the widget is added, you will be asked to select three timeline feeds (or lists). So, you can access your Twitter and Facebook both, right from one widget! Liking or Commenting on a Facebook post can be done by tapping on the post and then selecting View in Plume. Posting a status or Tweet can also be done from one place itself. 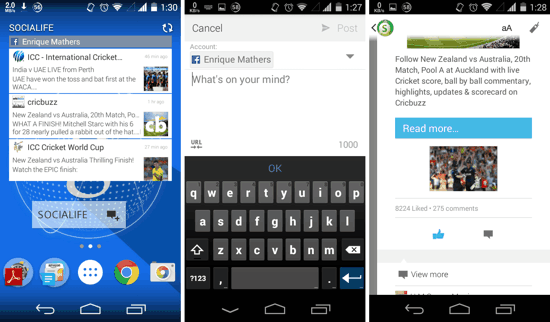 Socialife News is a News and Feeds aggregator app for Android which comes with 3 great widgets as well. You can add your Facebook, Twitter, YouTube accounts to Socialife and even add various News sources to it. The interface is slick and really intuitive. You can choose between the main widget, scrollable Timeline widget, or a status update widget. And yes, you can easily share to Facebook and Twitter directly from one place. The only drawback to the widget is that the number of posts shown in the widget are too few.

That’s it guys, this list of 3 Best Facebook Widgets for Android is done with now. Did I miss out on any good Facebook widget for Android? The comments section is all yours!