MRT Player is a free media player for Windows which plays both audio and video. Pretty much all the common formats are supported, AVI, MP3, MPEG, OGG. MRT Spectrum is a special spectrum analyzer window where you can type out text and leave it so that it jumps on the spectrum frequencies. Standard spectrum analyzer is also available, next to pretty much everything else that you’d expect from a media player.

Interface of this free media player is broken up into several windows. Main window with playback controls is located all the way at the top. Various additional windows of MRT Player can be turned off/on by putting check marks next to the appropriate option, Playlist, Equalizer, Effects. Both standard and the MRT’s text spectrum analyzers can be seen all the way at the bottom of the screenshot. There’s a large selection of themes for you to change the interface appearance. 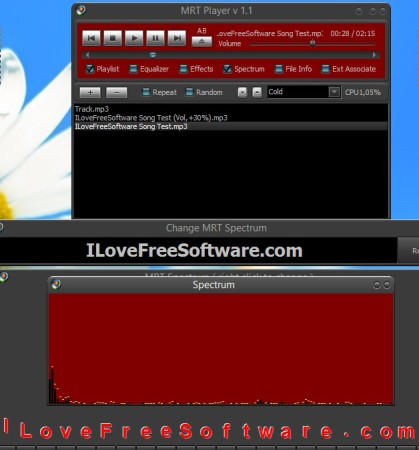 Even though all the windows that you see on the image above might seem a bit too much, they can all be turned off, leaving only the main window. This turns this into a minimalistic media player.

Of course it’s best that you have at least the playlist window turned on. Songs can be added to it by right clicking anywhere and selecting either Load Playlist or Add File/Folder. That’s the first step of setting up this free media player.

How to listen to music and watch video with MRT Player

Just the media player with the playlist can be seen on the image below. Don’t forget to put a check mark to whatever window you want to see activated. 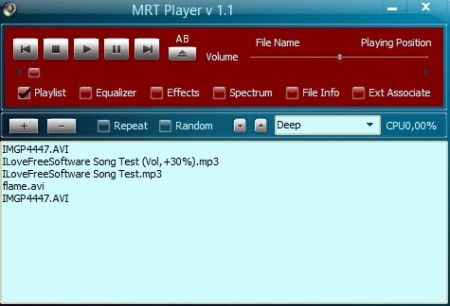 Both video and audio files can be added to the list. Once they’re there, the usual double click starts them. For audio tweaking, effects and equalizer, activate their windows by putting check marks on the main window. 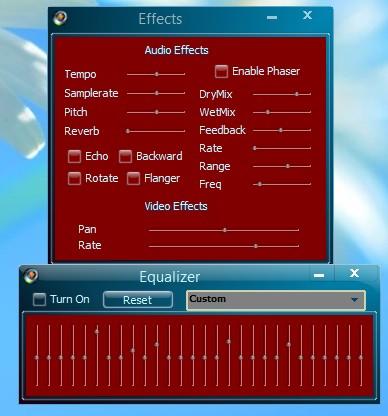 They’re pretty straightforward, as is everything else about this free media player. The only unknown is the MRT Spectrum analyzer.

Right click on it to open up the Change MRT Spectrum window. There adjust the text to whatever you want. All that’s left now is to sit back, relax and watch the letter jump up and down as the music plays.

MRT Player offers a lot for the very small amount of resources that it takes up. If you’re board with the media player that you’re using, or if it’s not working properly, give this free media player a try.