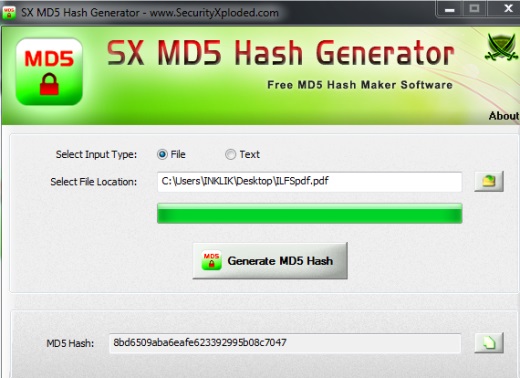 It is a simple yet handy software to quickly generate MD5 hash of any file. Such as a media file, image, pdf, text file, zip file, or any other file type. However, there is a shortcoming with this MD5 hash generator. You cannot compare hash values of two files directly using its interface. It can generate only a single file’s MD5 hash at a time.

SX MD5 Hash Generator also lets you generate hash value of any text entered by you. It can be used to test whether SX MD5 Hash Generator works perfectly or not. Enter a word or phrase and generate its MD5 hash. After that provide another text and generate hash for that text. You will notice that both MD5 hash values are different, just like visible in screenshot below. But, if you will enter the same text again that you entered firstly, you will find the same value.

This is one of the useful feature of SX MD5 Hash Generator which is not present with similar tools, like MD5 Checksum.

Key Features Present In This Free MD5 Hash Generator are:

Note: You would like to check out these feature rich hash generator tools that can generate MD5, SHA1, SHA512, CRC32, etc. hashes of files: CHK, Digital Volcano Hash Tool, and Programmers Calculator. Among these tools, CHK has the facility to compare hashes of two or more files.