Timer4Exercise is a free bodybuilding timer for Windows which notifies you after a certain interval of time passes. It’s aimed at bodybuilders or anyone else who’s interested in exercising. With Timer4Exercise running you don’t have to keep track of time that you’ve spent exercising yourself, but rather leave it running on your computer and just listen to notification when it’s time to switch to the next exercise.

This free timer is very simple, without a complicated interface. The only thing that you’re going to see is the clock in the bottom left corner, time interval adjustment field above it and control buttons on the right which allow you to start and stop the timer. Once that the timer is running, you’re going to see remaining time that’s left until the next notification posted and updated in the Time Elapsed box. 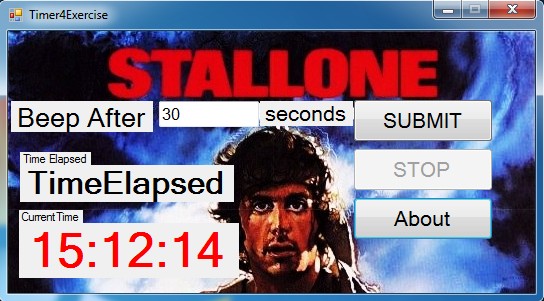 When exercising and bodybuilding, it’s important not to overdo it, and timers are a great way of how you can know when to stop. Like with everything else, there is such a thing as overexercising, and it can cause you more harm and not just that, it can also set you back in your bodybuilding endeavors. Here’s a few pointers to help you get started.

How to keep track of workout sessions with free bodybuilding timer

First and only thing that you have to setup is the Beep After value. Here you need to enter the time interval after which you’d like to receive notifications. Type it in in seconds, so let’s say for example that you would like to exercise 5 minute sets, you need to type in 300 here, so it’s 300 seconds. Default value is 30 seconds. 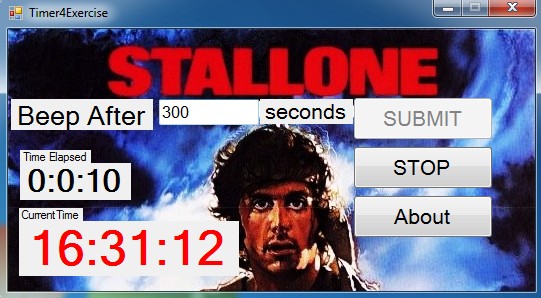 Time Elapsed box will start measuring how much time has passed. Once that the value reaches 5 minutes, you’re going to hear a short notification. That’s your sign that you have to either stop exercising or that you have to switch to the next exercise, start working on a different muscle group. As soon as the first 5 minute interval elapses, Timer4Exercise starts keeping track of the next 5 minute interval in the Time Elapsed box and once it elapses you’re again going to be notified with a beep.

Timer4Exercise is a great way how you can keep track of how much time has passed when you’re exercising. Just “wind” it up and leave it running. Every time that the interval that you’ve setup elapses, you’re going to be notified about it. Everything worked just as advertised for us. There were no problems. This is a portable application, which means that if you’re only interested in checking it out, you don’t have to install it.