Here’s a list of 5 lottery result checker apps for Android which you can use to check lottery results on your Android powered devices. The big lottery craze in the US has been over for a few weeks now. Biggest jackpot in the history has been won. If you were playing then or are playing the lottery now, having a lottery checker on your Android powered smartphone or tablet would save you time looking up results in person. With these apps you’ll be able to keep track of lottery results from all the more popular lotteries from around the world in just a few taps.

Let’s see how exactly it is that they work and what do these app have to offer. 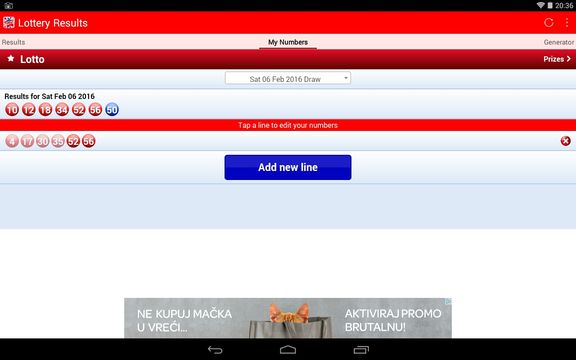 Lottery Results by Red Knight Apps is a multi-purpose lottery result checker app for Android where lottery results, among other things, from the UK (Lotto, Thunderball, Health Lottery, Irish Lotto) and the EU (EuroMillions) can be checked.

Checking lottery results is not the only functionality offered by this app. Swiping left/right will allow you to switch between a “number generator”, where lucky numbers for all the previously mentioned national lotteries can be generated, a “lottery news feed”, where news related to UK/EU lottery can be found and lastly there’s the “stats” section of the app where you’ll be able to find info on the number of times a certain number was drawn from the drum. Special feature called “My Results” will check numbers from tickets (multiple lines) against drawn numbers and indicate which numbers are correct (see image above). Makes the process of eliminating tickets easier. 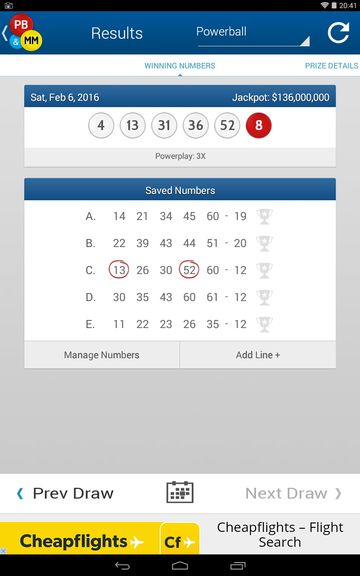 US Powerball & Mega Millions is just like Lottery Results by Red Knight, with the difference that here focus is on the United States lotteries and it is also a much better app both in terms of functionality and user interface design.

Just like Lottery Results by Red Knight Apps, US Powerball & Mega Millions also features a lucky number generator, for generating numbers for either Powerball or Mega Millions. What you see on the image above is the “Results” section of the app. Here not only that you’ll be able to see the latest drawn numbers, but also add lucky numbers that you picked after which they are cross referenced with the winning numbers to see if you won anything. The ones that you guessed are circled in red. Another useful info offered by the app is the “Prize Details” section where a break down of all the minor winnings (those that didn’t guess all 6 numbers, but did guess 5, 4, 3, etc.) are shown.

Get US Powerball & Mega Millions.

Also, have a look at 5 Random Number Generator Apps For Android. 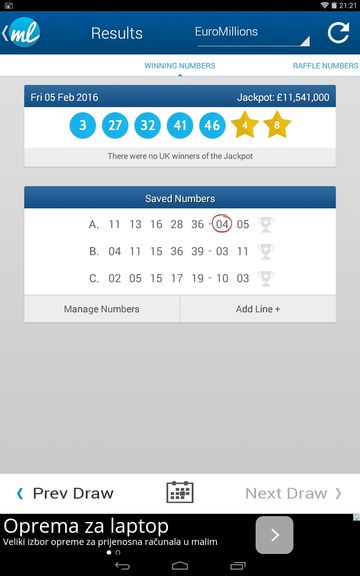 UK Lottery Results is a lottery results app released by the same team that’s behind US Powerball & Mega Millions. Same layout and functionality are available. The only difference between the two is that here UK national lotteries and the Europe wide EuroMillions are supported.

Next to results, you’re going to be given the option to add numbers from tickets and compare them with the results from the lottery draws. The ones circled in red are the winning numbers. Number generator is also included which will allow you to generate numbers if you happen to buy a lot of tickets and you’re running out of ideas which numbers to use. A statistics section is also available which will report back stats on how many times a specific ball number was drawn in previous lottery draws. 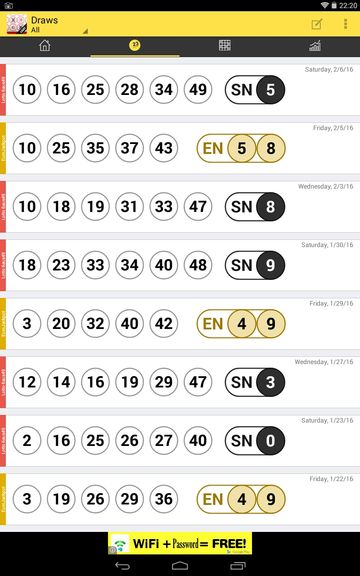 Clever Lotto Light is another lottery results app for Android that supports multiple lotteries, only now instead of focusing on UK or US based lottery, it lets you access results from German lotteries. EuroMillions is also included as well as EuroJackpot.

As far as functionality goes, there are a lot of useful features. First thing that you’re going to see after launching the app is a list of results from all the supported lotteries combined. Use the left handles to figure out which is which. App lets you add ticket numbers to keep track of them, and it even has a balance of money spent/winnings for you to keep track of your success. As a bonus, app also has notifications about new lottery draws that happen.

Also, have a look at 5 Lottery Number Generator Apps For Android. 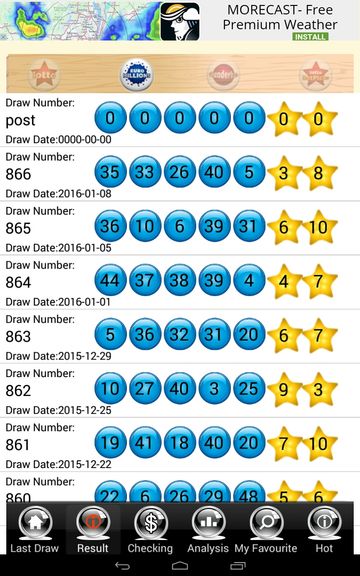 UK Lotto EuroMillions Live is another lottery results app which gives lottery results for the UK and also the EU, EuroMillions. App also has a checking feature where you can type in your numbers and the app will compare them against all the drawings of a particular lottery.

Other info that the app offers are things like analysis of the most popular numbers, how many times they were drawn, number totals and other info. A unique feature found here is favoriting, which lets you save frequently used ticket numbers for quickly checking them against drawn numbers.

All 5 of the lottery result checker apps from the list above worked great and offered a lot of useful info for their respective lotteries. I mostly focused on the more popular lotteries like the PowerBall, Mega Millions, EuroMillions, EuroJackpot and so on. There are apps for lots of other country specific lotteries that are worth checking out in Google Play. I enjoyed and will continue using UK Lotter Results. Let me know what you think by leaving a comment down below.