In this tutorial, you will learn how to send large files with Whatsapp for Android. Whatsapp normally has a default media file attachment limit of 16MB. This might not be enough for certain users. Thankfully, you can increase this size limit easily with a simple tweak. There’s just one caveat here though — you need a ROOTED device to perform this tweak in Whatsapp. If you don’t have ROOT access, I am sorry but you shall look elsewhere. Root users can read on to find how to send large files via Whatsapp. And, by the way, the recipient DOES NOT need to change or do anything to receive a larger file, because there is no size limit in Whatsapp for Receiving a message! You can apply this tweak and send files larger than 16 MB via Whatsapp to any Whatsapp user. 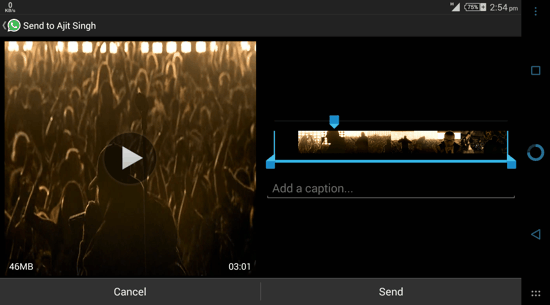 Well, well, what do we have here? Are you interested in rooting? You might have to put in some extra effort for gaining ROOT access on your device, and head over to XDA Developers and then search for your device-specific forums.

How to Access the Root Directory of an app on Android?

As I mentioned earlier, you can not send large files with Whatsapp; to be precise, not larger than 16MBs by default. But there’s a way out for Root users. If you are rooted, you first need to Install a Root File Explorer for Android. There are numerous options available on the Play Store, and you can install any ROOT explorer that you like or just get this app straight away. In fact, most of the mainstream file managers also have this functionality, so you can check for that with your current file Manager too. Once installed, open it and then go to the root folder of your device. Now go to data -> data -> com.whatsapp as shown in the screenshots below (yep, open the ‘data’ folder, then again the data folder within that, and then the folder named as com.whatsapp). 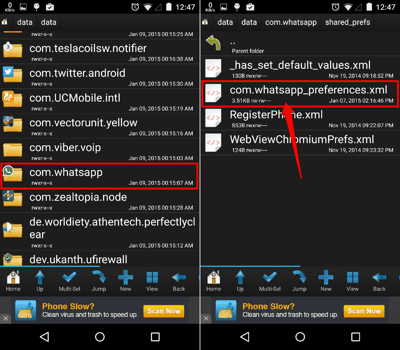 How to send large files with Whatsapp for Android?

Okay, Now you have to tap to open the File named com.whatsapp_preferences.xml (shown in the second screenshot in the last section above) and select the RB Text Editor when prompted. You will now enter a text-editing screen. Don’t be overwhelmed though, it’s pretty easy. You don’t need to play around with any of the text. Just find the following values:

Change the numeric value from 16 to whatever you like (this is shown in the second screenshot below). Do remember that the maximum size is 2047 MB (around 2GB) for some devices and 1023 MB (around 1GB) for others. I’d suggest you to change it to a value much below that (I changed it to 500 on my device). 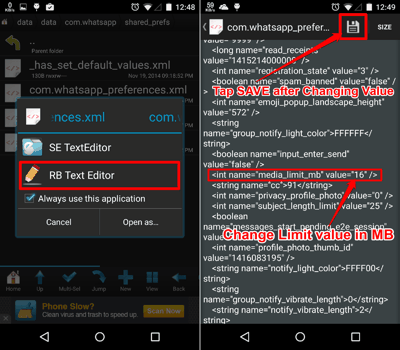 Once edited, tap on the Save button on the top right corner (highlighted in the second screenshot above), until you see a toast notification saying ‘Changes saved to the file’. That’s it!

Once you change the values, you need to Force-Stop Whatsapp by going to System Settings -> Apps -> Downloaded -> Whatsapp -> Force Stop. If that doesn’t work, just reboot your device. You can also checkout this post if you want to move Whatsapp to your external SD Card (psst, this tweak can be done even on non-rooted phones!).

Now when you relaunch Whatsapp, you will be able to send large files via Whatsapp. Pretty cool, isn’t it!

So folks, how did the above tutorial workout for you? Yep, no one is holding you back now, and you can easily send large files with Whatsapp! You can share any issues that you face in the comments section below. And don’t forget to mention any other methods that you might know of.