I have been looking for some free Dropbox Music Player for Windows that I could use to stream music files from Dropbox directly, without a need to install Dropbox itself. This would be very useful for me as I could stream the music files that I added in Dropbox in my home PC directly to my office PC, without having to sync my entire Dropbox folder with office PC. I was hoping that most of the music players that support streaming online music files (like VLC) would be able to do that, but turns out that is not the case. I actually wasn’t able to find any mainstream media player that I could use as Dropbox Music Player!

Then I came across Clementine, and my world changed forever (not really, but you get the idea).

Clementine is actually a free music player with various advanced features like cue sheet support, tabbed playlists, transcode music, edit tags, queue manager, and more. Another use feature of this music player is that it supports various cloud services including Dropbox, Google Drive, etc. and enables you to directly stream music from them (we already explained earlier how to use it as Google Drive Music Player). So, Clementine is no doubt one of the best Windows Dropbox Music Player to stream audio from Dropbox. 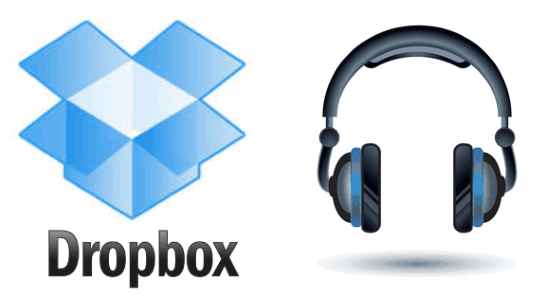 How to Stream Audio from Dropbox on Windows:

To get started, the first thing you need to do is download and install “Clementine” on your PC. You can get its download link at the end of this article. After that, simply open it up and then click on the “Internet” tab on the left of the interface. When you do that, you will see the list of supported services from where you have to select “Dropbox”. 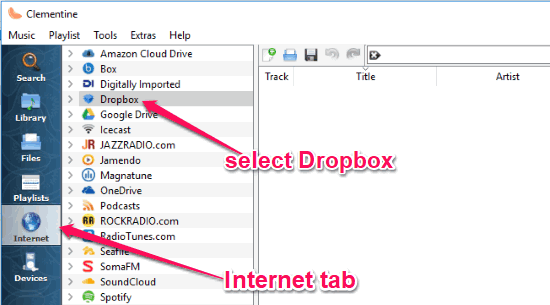 When you do that, a new window will pop up where it will ask you to login to your Dropbox account. You can do that by selecting “Dropbox” on the left and then entering your Dropbox credentials. 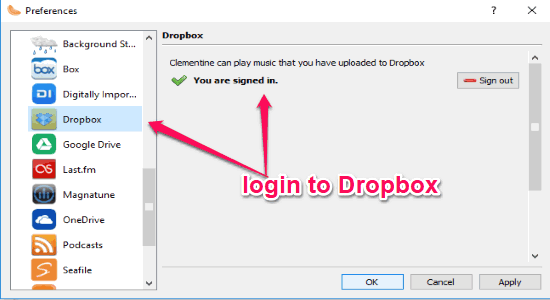 As soon as you login to your Dropbox account, Clementine will automatically start scanning all your Dropbox folders for audio files. It supports different file types like MP3, OGG, WAV, etc. Once the scanning is complete, you will be able to see Dropbox music files under the “Dropbox” option on the left of the music player. The songs will be auto sorted by artists and albums, as shown below. 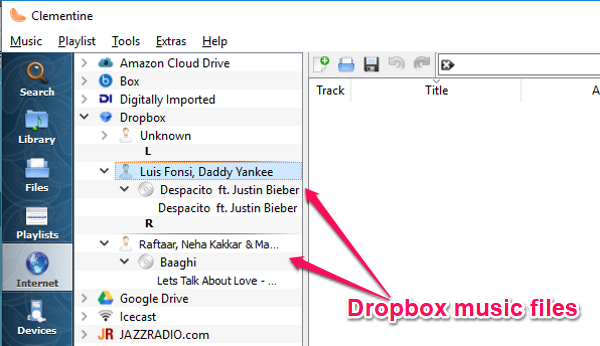 Now, you can simply click on the music files and play them using this Dropbox Music Player (Clementine). The controls of the music player will be same for the Dropbox files as well. You can also create custom playlists and add your favorite Dropbox music files to them for quicker access. 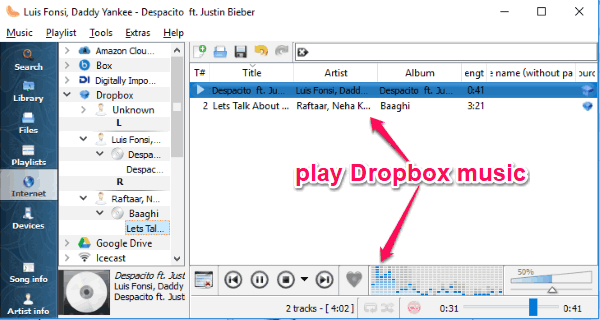 So, if you also have been looking for a Dropbox Music Player for Windows, then using Clementine is definitely one of the best options for you. You can simply connect your Dropbox account and stream all your music files directly on this music player. No more downloading audio files from Dropbox to PC for playing them, as it helps you stream them without downloading. I was really hoping to find a way to play Dropbox music on VLC, but wasn’t able to do that. If you know how to stream Dropbox music to VLC, let me know in comments below.

Get “Clementine” from here.