This article details 5 best music players for Windows 10. Whether it’s playing games, finishing work assignments or just casual web browsing, almost all of us (like to) have our favorite music playing in the background. For this reason, a capable music player software is one of the applications that you must have on your computer. And while Windows Media Player does the job just fine, what if you want something different?

Note: The applications discussed in this article only let you play digital audio files. If you want a software that can help in playing and managing other media (such as videos) as well, you can check out the listing of best media players for Windows 10. 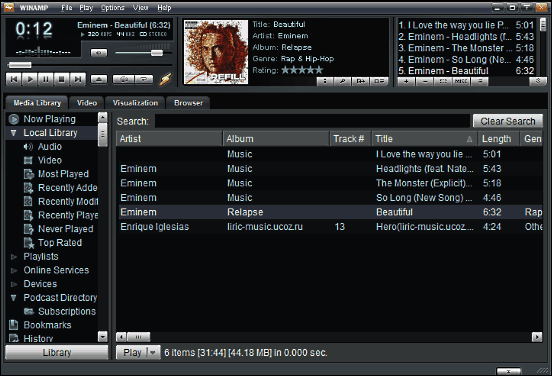 As far as music player software applications are concerned, Winamp is nothing short of a legend. Incredibly popular and a staple of just about every computer until only a few years ago, Winamp redefined the way we listen to music on our PCs. Extremely feature loaded and ridiculously easy to use, Winamp makes listening to music a breeze. Owing to a long period of development, it has a lot of impressive goodies. The media library feature scans your computer for audio files, which are then added to the library along with metadata. The application can also fetch ID3 tag information such as album/artist name, cover art etc. from the web, which can be used to automatically tag the music files. And thanks to the Podcatcher feature, Winamp can even display RSS feeds. Then there’s support for a variety of PMPs and Mass Storage Compliant devices, as well as tons of plug-ins (which include everything from visualizations to audio effects), skins, and global hotkeys as well. Winamp supports all major formats like MP3, AAC, FLAC, WAV, and WMA. And though it’s no longer under active development, you can get the last stable patched version here. To sum it up, Winamp still remains one of the best music players for Windows 10. Check out this link to know more about Winamp. 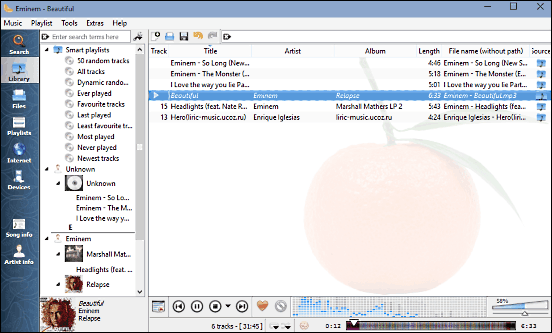 If you want a powerful music player for Windows 10 that also lets you organize your music collection effortlessly, look no further than Clementine. It has pretty much every functionality that you’d expect from a music player, and then some more. You can easily add all of your music to Clementine, and it’ll automatically sort it up, thanks to the powerful music library feature. The application can categorize your music based on factors such as artist, album etc. Apart from that, Clementine can automatically create smart and dynamic playlists as well. You can of course, create your own playlists, and import existing playlists in a variety of formats (M3U, PLS etc.) too. Clementine can also fetch missing tag information from the MusicBrainz database. Clementine supports all primary audio formats such as MP3, FLAC, and AAC. Think that’s all? Hardly. A streaming radio powerhouse, Clementine lets you listen to internet radio from popular services such as Grooveshark, Spotify, Jamendo, and more. Heck, it can even search and play music stored on cloud storage services such as Box and OneDrive. Add to it goodies like podcasts, support for audio CDs, and remote control via Android devices, and Clementine gets even more awesome. To get even more info about Clementine, check this link. 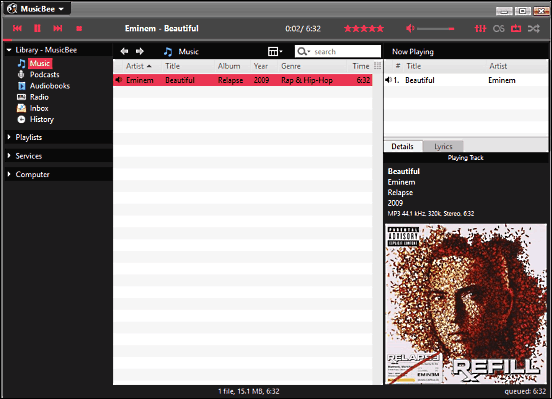 Bursting with features, gorgeous to look at, and completely gratis; that’s MusicBee for you. It’s a versatile music player and manager that’s not only easy to use, but also one of the most customizable ever. The incredibly powerful music library feature can manage thousands of tracks without breaking a sweat, and the efficient search ensures that you can find the track you’re looking for in no time. If some tracks are missing their ID3 tag information, you can easily add the same via MusicBee’s built-in tag editor module. MusicBee can automatically connect to the Internet and grab important information about the playing track(s) such as artist images, biography, track lyrics, and a hell of a lot more. You can even add songs from your audio CD collection and directly rip them to your music library. Then there are features like multi-format encoding and support for countless plugins of different types. However, the standout feature of MusicBee is its customizability. It includes a whole bunch of color themed skins that let you tweak the player as per your taste. And the multiple playback modes (especially the Theater mode) are something you have to try out for yourself to believe.  From MP3 to AAC, and FLAC to WAV; MusicBee can play just about everything you throw at it. Visit this link to know more about it. 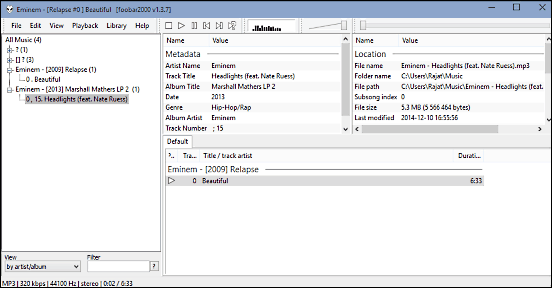 All of the music player applications discussed so far are chock full of features, and let you tinker with them as much as you can, to make for a customized listening experience. That’s certainly not a bad thing, but what if you want just a bare-bones music player for Windows 10 that you can use right away, without having to fine-tune ten thousand different options? If that’s the case, then Foobar2000 is for you. It’s one of the most minimally designed music players you’ll ever see. In fact, the UI might even seem boring to some. But don’t let that fool you. For something that can be (optionally) used as a portable application and measures next to nothing (under 4 MB) in size, Foobar2000 packs in a whole lot of punch. It’s extremely modular, which means that you can tweak just about every aspect of it individually (although it does take a while knowing how to get this done). It supports advanced tagging capabilities and can directly rip audio CDs to your music library. Apart from that, Foobar2000 also includes built-in media streaming and gapless playback support. You can also change the sound output by means of equalizer and DSP modules, and keyboard shortcuts make controlling the player a cakewalk. Heck, Foobar2000 can even play files within ZIP and RAR archives. Almost all common (and not so common) audio formats such as MP3, AAC, FLAC, ALAC, AICC etc., are supported by Foobar2000. Check out more about it here. 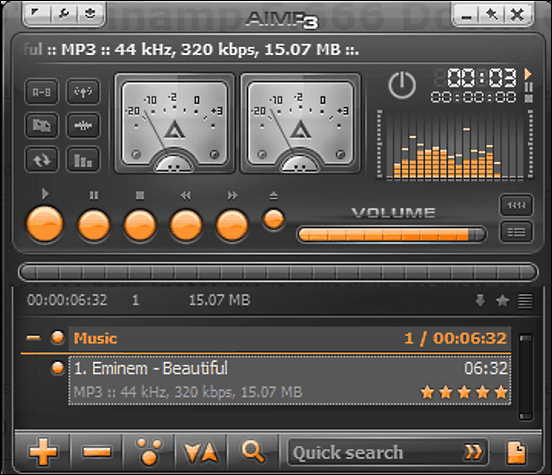 The above discussed Foobar2000 is no doubt a highly capable application, but its overly simplified user interface leaves a lot more to be desired. If you’re on the lookout for a lightweight and efficient music player for Windows 10 that makes easy work of playing music on your computer and looks good while doing so as well, you can end your search at AIMP. It’s super simple to use, and is blazing fast. AIMP includes built-in 32-bit audio processing that makes for a better audio output. You can import existing playlists, as well as create new ones (all major formats are supported). Apart from that, AIMP also lets you listen to Internet radio stations, and the customizable global hotkeys make it extremely easy to control the music playback even if the application is minimized. The sound recorder module of AIMP can be used to capture audio from all major devices, which can then be saved into a number of major audio formats. Despite being minimal, AIMP includes the capability to manage and organize your music, thanks to the audio library module. You can edit ID3 tags, and even have the application automatically shutdown the computer once the playback is finished. AIMP can easily play all standard music formats like MP3, AAC, WAV, FLAC, and OGG. To read more about it, check here.

Listing to music is one of the most popular and common computer based activities, which makes it extremely important to have a powerful yet easy to use music player installed on your system. And the above discussed music players are just perfect. Take them for a spin, and let me know your favorites in the comments below.