EMCO Malware Destroyer is yet another antivirus solution that you can use in order to improve the security of your PC. But unlike other AV programs that are out there, Malware Destroyer prides itself for having the fastest virus scanner engine, with the ability to scan the computer for 10,000 different threats in just 10 seconds. Let’s see if it’s really as fast as the creators say that it is, and more importantly if it’s as good as the competition, will it detect viruses? 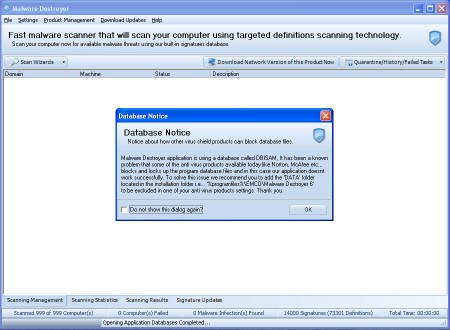 After starting Malware Destroyer for the first time you’ll be greeted with a warning that some of the other antivirus programs might detect Malware destroyer’s definitions database and lock it thinking that it’s viruses, and also that you should exclude it from other AV programs. Even though it says on the main website that Malware Destroyer can work alongside other AV programs, after trying to unsuccessfully install it next to ESET’s NOD, we realized that it’s not possible to do so. If you’re thinking that Malware Destroyer might be a rogue AV, because NOD blocked it, don’t worry it’s not, we checked.

Let’s cut right to the chase and see what kind of detection rate and speed we get with Malware Destroyer. The first thing that’s needed to be done before you start a virus scan would be to check updates. Those who do not do that will waste a scan, because they will have to repeat it again when they realize that updated version of virus definition exists. 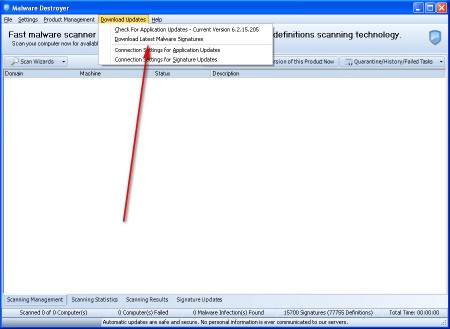 To update Malware Destroyer click on Download Updates. You can either update the application or just the virus database, we decided to only update the virus database. Update size is relatively small, which is great for those who still don’t have access to broadband connection.

To start the scan, you’re gonna have to return from the update manager to the scanner selection, which is located on the lower left corner. While in the scanning management, on the top left corner, you should be able to see a scan button, from there we selected scan the whole computer, and believe it or not it finished in just 34 seconds: 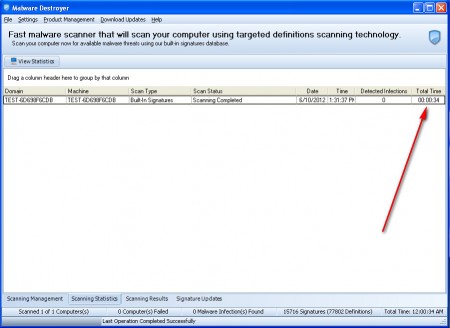 True it’s not 10 seconds, but it’s still pretty impressive. The results above show that there were no detection, but when we were testing the application with our standard virus test files they were detected just fine.

Conclusion and some final advice on this virus scanner

Company that created and that maintains Malware Destroyer is known for their network tools and utilities, and that’s exactly how this AV was envisioned. Network is one of the most favorite mediums through which malware spreads, and you can use Malware Destroyer and Malware Destroyer network app to combat network virus infection. Small amount of signatures in the definition database should not deter you from using this application, because each one of these definitions can detect several different viruses, and the real number of virus detection that are possible with this antivirus program is actually larger. Use it if you need a fast and effective way of cleaning your PC from pests.