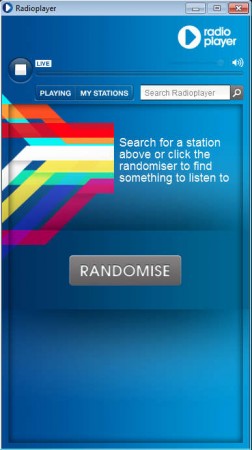 Check out some similar software reviewed by us like: RadioTime, Jango, and RadioMaximus.

The interface looks similar to modern looking desktop client which can be seen in the image above. Radioplayer can also be listened on the internet, by opening up the Radioplayer website and selecting Browse or by installing the Chrome extension, if you’re using Google Chrome. Radio player’s Desktop client can be used on Linux, Windows, and Mac and it doesn’t require a web browser to work. Third way of how you can listen to Radioplayer would be by installing the iPhone or iPad app from the App Store.

Note that some radio stations cannot be played outside of UK, because of copyright issues. So if you’re trying to listen to a radio station and it doesn’t work, that’s the reason why it’s not working. If Android users feel left out, don’t worry, there’s also an app for Android in the making.

How to Listen to Online Radio Stations From UK for Free with Radioplayer?

Open the Radioplayer website and click the Listen tab on the right side of the Home tab to launch the Radioplayer desktop client. Now, Start by searching for online radio stations that you are interested in and then by building your favorites list. In the top right corner you’re gonna see the search box, type in for example “rock“, and you should receive a list of stations which are related to rock. 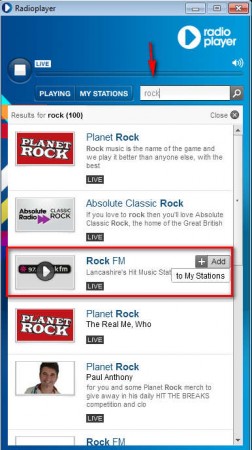 When you hover over the name of the stations, on the right you should see the add option, to add the station to favorite. And on the left, where you have the icon of the radio station, you can open it up right away. 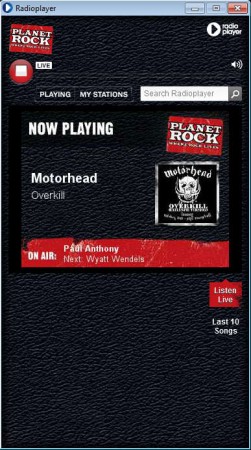 While the online radio station is being played, you’re gonna receive information about the current show or song that’s playing, program schedule for later and so on. Everything works the same when you install the iPhone app, listen to radio stations online on the Radioplayer website or when you use the Chrome extension.

Radioplayer is a very attractive online radio player. There are several hundred radio stations which are offered from all over the UK. Even though we said that some stations might not work, we haven’t experienced any kind of problems ourselves when flipping through stations, even though we’re not from UK. Audio is clear and it has a very good quality. With some stations you can choose between higher and lower stream quality. Listen to online radio stations from UK with Radioplayer for free.