Here’s a list of 5 Wifi file sharing apps for Android which you can use to share files via wireless networks between your Android devices. Sharing files via WiFi requires both users to have Wifi sharing apps installed, and of course for them to be connected to the same Wifi network. Wifi sharing is faster than sharing via Bluetooth, and it’s faster to setup than for example PC file transfer (cables aren’t required). First step in using Wifi file sharing apps is selecting an app. 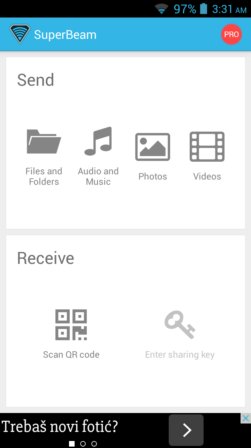 First up is SuperBeam, which is a very popular Wifi file sharing app. SuperBeam doesn’t even need a Wifi network to work. It will create a WiFi hotspot using the built-in hotspot feature that most modern Android phones have.

Multiple files can be sent at once, and you can send connection information to the other device to which you’re connecting via QR codes (SuperBeam has a built-in QR code reader) or via NFC. All file types are supported, and it’s even possible to setup something similar to a file server on the main device (from where files are sent), so that they can be downloaded via a web browser from any device connected to the created hotspot network. 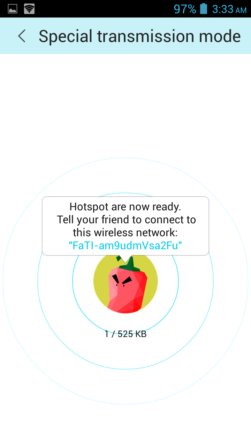 SHAREit has pretty much the same kind of features that SuperBeam has. Devices connect directly, wirelessly using generated hotspots. When running the app for the first time you’ll be asked to register a profile, an avatar that’s gonna be used as an ID to connect with other devices that use SHAREit.

All the devices from which you want to receive files will have to connect to your hotspot and have SHAREit installed. One thing that makes this Wifi file sharing app different from SuperBeam is that even APK files of apps that you have installed on your device can be shared.

Also have a look at Share Files Free From PC, Android Over Wi Fi Network Using Any Send. 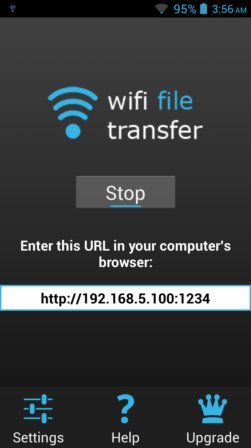 WiFi File Transfer shares files by creating a temporary server on the device where the app is installed and used.

After running WiFi File Transfer it gives you an HTTP address that you can access via a web browser on all the devices that are connected on the same network (virtual hotspots work too). Clients just need to type in the given address (see image above) in their web browser from where they can browse the contents of both the internal memory and the SD card and download the files that they find interesting like they would download them from any other website. 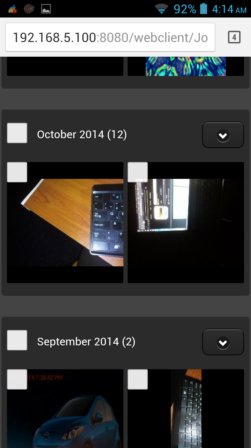 Web interface of WiFi File Share Free is much smoother and offers more features. It for example, has a built-in audio player which lets you stream music from the host device in a web browser on your desktop. Images can also be viewed in a built-in image viewer. Small drawback is that WiFi File Share is limited to only a couple of folders (like music, photo, video) in the free version.

Also have a look at Synchronize Android device and PC over WiFi with Folder Sync. 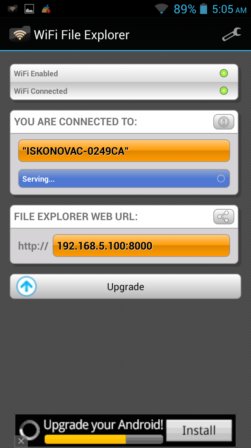 It will also create a server on the host device, giving you full access to both internal memory of the phone and the SD card. Server’s web interface lets you view and stream media straight from the device, but it also lets you download and upload files to the host device. Another very useful feature of WiFi File Explorer are the device status controls where you get to see how much battery is left on the host device, what kind of signal strength you have and more.

I really like the features available in WiFi Explorer and SuperBeam, so these two are my favorites if I had to pick a favorite from the list of file sharing apps above. Let me know what you think the most useful app is in the comments down below.