Here’s a list of 5 MP3 audio cutter apps for Android which can be used to cut MP3 audio tracks. With the help of these apps you’ll be able to load up MP3 music, audio tracks and recordings and cut out the parts you don’t need in just a few taps. It might even be easier than doing it on an actual computer seeing how they are optimized for the touchscreen pretty well. Ringtones, lecture recordings and more can be easily created and trimmed.

MP3 Cutter is an MP3 audio cutter app for Android that’s very easy to use, and it also supports audio track merging. After launching the app, you’ll be presented with your MP3 library, like you would in an audio player. 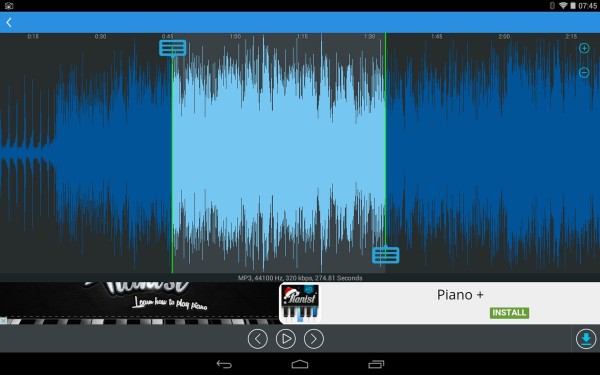 Once you select a track, a pop-up will appear asking you if you want to cut it or merge with another MP3 track. On the image above I’m using the waveform analyzer and the two sliders to make a cutout selection. Plus and minus buttons in the top right corner are for zooming in on a particular section of the track, for more precise cutting. Once you’re done with that, tap on the export button in the bottom right corner to save the cut track to your library.

Get MP3 Cutter by accountlab.

MP3 Cutter by ukpiao operates similarly to how previously mentioned MP3 audio cutter app does, but with a couple of additions.

First there’s the fact that more formats are supported, WAV, AAC and AMR. Then you can also record audio clips, so it’s an audio recorder as well. Lastly the MP3 cutter is a bit more advanced, seeing how next to sliders you can also manually type in seconds/milliseconds for the point A and point B markers where the track is to be cut.

Get MP3 Cutter by ukpiao.

Also have a look at Android MP3 Cutter & Ringtone Maker to Create Ringtone from MP3.

MP3 Cutter and Ringtone Maker supports both audio cutting and audio recording. You’ll be asked what you want to do after launching the app. 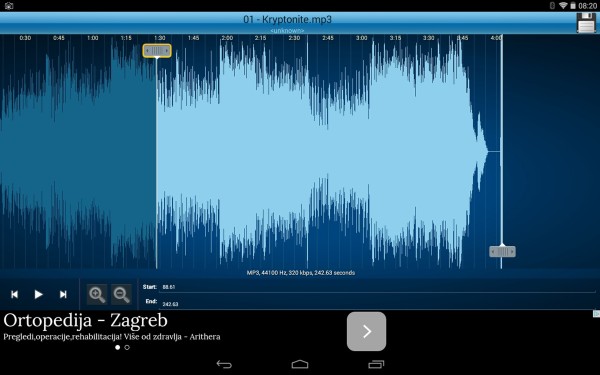 There’s a pinch to zoom in/out functionality on the waveform analyzer, so you can make more precise point A/point B selections. All the more usual audio formats are supported.

Get MP3 Cutter and Ringtone Maker.

MP3 Cutter Ringtone Maker Free is another great MP3 audio cutter app for Android that’s lightweight and has everything you need for cutting not just MP3s, but also WAV, AAC and AMR audio formats. 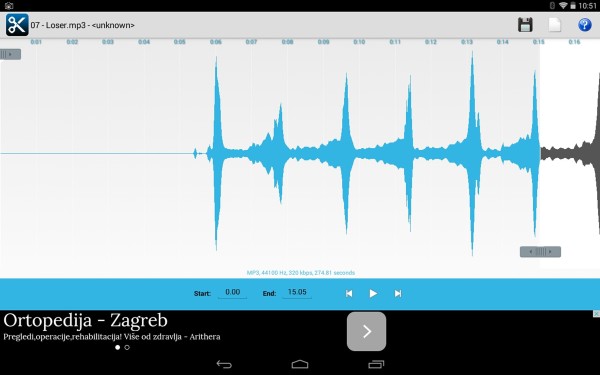 Built-in recorder is also included, for making recordings. Waveform analyzer has pinch to zoom in/out (4 levels), sliders for setting up point A and point B cut points and input boxes for manually setting the cut points (in seconds and milliseconds).

Also have a look at Android Music Player App with In Built MP3 Cutter.

Mp3 Cutter & Ringtone Maker by Sakib is pretty much the same to all the other MP3 cutter apps that I covered when it comes to functionalities, but it has a bit more nicer to look at interface. 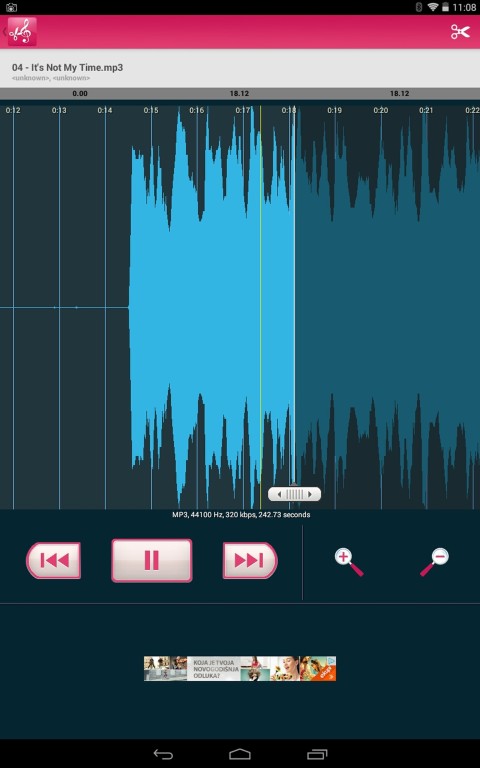 All the controls are clearly laid out, for zooming in, playback, setting up the A/B cut points. The only small drawback is inability to input cut points manually, by typing in second/millisecond of the cut, but it’s nothing to drastic. Tap on the scissors icon in the top right corner when you’re finished to export the cut MP3.

Last two MP3 audio cutter apps are my favorites from the list above, MP3 Cutter Ringtone Maker Free and Mp3 Cutter & Ringtone Maker by Sakib. They offer a great UI and selections of features. Let me know what you think by leaving a comment down below.