Here is a list of 4 Best MP3 Tag Editors for Android. These apps can be used to edit ID3 Tags of MP3 songs and certain other Music files as well. It may happen that your Music life is as unorganized as your living room on a Sunday morning. If that is the case, you need to brush yourself up and check out the below-listed MP3 tag Editors for Android. These apps can edit the artist, track, album, cover art, and other details for any MP3 file, and in fact, are more convenient than their desktop counterparts!

There are several MP3 Tag Editors for Desktop as well. Head over to this article to check out a few software for your PC which can add missing ID3 tags automatically to Music Files! 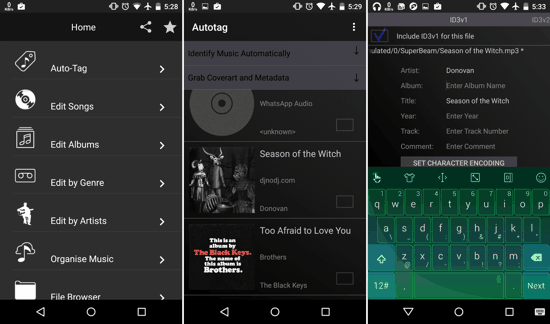 Music Tagger for Android is by far the most feature-packed and intuitive Mp3 Tag Editor for Android. The Autotag functionality is pretty good and lets you edit any file automatically. The app also has batch operations option which lets you update the ID3 tag and Cover Art info of Mp3 Songs several at once. But what I liked about this app was the fact that it can even download and embed the lyrics into any MP3 song! Do keep in mind that the app is still in beta, so occasional hiccups here and there are expected. I didn’t have any issues with the app though, and even the lyrics were embedded efficiently. If you are looking for something with a ‘Stable’ tag, you should look at the other MP3 Tag Editors lower down this list. 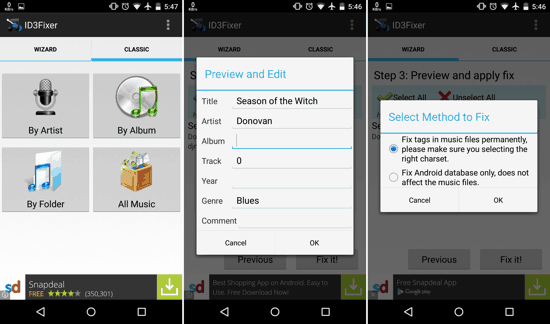 ID3Fixer for Android is a simple to use ID3 Tag Editor app, with a focus on minimalism. The interface isn’t that great, but if you decide to live with that, the functionality offered is neat. ID3Fixer for Android lets you Edit any MP3 file, Track name, Artist, Album, etc. But as can be seen in the second screenshot, the best part about this app is that you can choose how to save your edits — whether permanently for the file, or only in the Android Media Library. 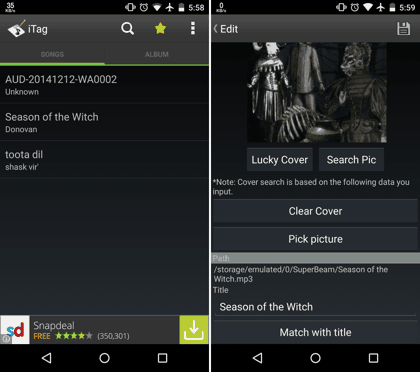 iTag Music Tag Editor for Android is another MP3 Tag Editor which lets you Organize your Music library. iTag has a pretty simple interface which shows up a list of all music files on your Android device in two tabs — Songs and Albums. Opening any Music file will give you the usual options to edit the cover art, or other details related to the track. There are no other bells or whistles to talk about, and the app is the simplest among these MP3 Tag Editors. 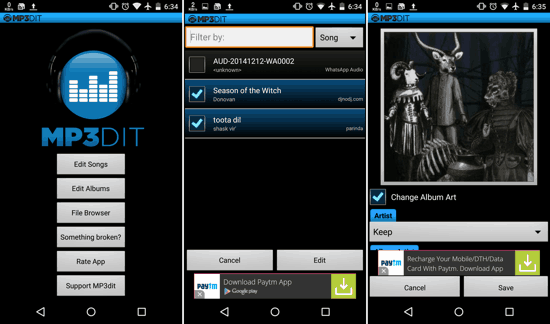 MP3dit for Android is another simple app to edit the ID3 tags associated with Songs and Albums on Android. You can also choose to browse the folders on your Android and select the desired file for editing. MP3dit for Android is among the few MP3 Tag Editors which can be used for batch editing music files.

That’s it for now guys. I hope this list of 4 Best Mp3 Tag Editors for Android proves helpful for you in your hour of need. Go ahead, organize your Music library and thank me later. And yes, I might have missed some other good apps too, which you are welcome to share in the comments section below.