This post lists 5 best free ad free music player Android apps. If you are an offline music lover and don’t like the built-in music player for some reasons then you can switch to these apps. Here these apps support a lot of music files format that you play and organize in an ad free environment. These apps aren’t bundled with ads or any other affiliate links so it doesn’t matter if you play your songs while internet is active or not.

Apart from playing and organizing songs, you will find other useful features in these that you will like. These apps come with built-in songs organizer, playlist manager, ringtone maker, SoundCloud support, DLNA, colored themes, gapless playback, and a lot others. Just let these discover your songs automatically or add them manually in the custom playlists.

There is a long list of music player apps for Android that you can use to play local songs, songs from Dropbox or Google Drive. But the annoying part is the ads in the free version. The ads become annoying when you want to multitask by playing songs in background. The popups at the bottom, sidebar or full screen ads are so annoying that they distract so much. And that is why you can use the following apps. You can play your songs and then hide these apps in background. They all add playback controls in the notification center so you can control playback without actually opening the app. 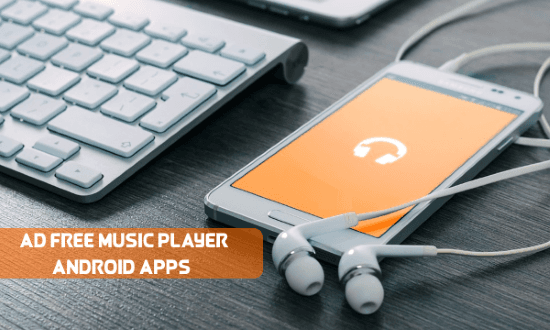 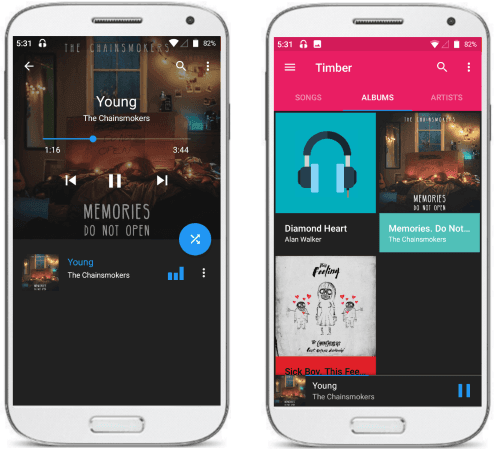 Out of all the music player apps that I have used so for far, Timber is one I liked most. It is an open source simple music player app with some really useful features. Even though there is a paid version of this app with some extra features but there are no ads in the free version too. It automatically detects all the stored MP3 files on your phone and then list and organize them based on the corresponding artist or album.

It offers you a built-in sound equalizer as well that will be useful in case you want to use some custom audio effects while listening to songs. Other features that it has include dark mode, color themes, different skins for now playing, playlists, and managing song queues. In addition to all this, you can see the lyrics of the songs if they are associated with the audio file that you are currently playing.

Simply download it from the Play Store using the above link or if you are interested in its code then see this link. After installing, make it your default music player and then start playing songs. It automatically lists all the songs by scanning your phone memory and SD card. Create your playlist and then push it in the now playing queue to listen to the songs in any way you want. From the hamburger icon on the top right, go to the app settings and use the options for dark mode, color themes, and now playing skins(some skins are available in paid version). 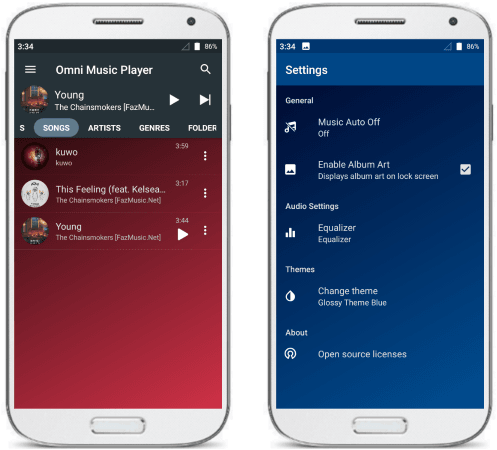 Omni Music Player is another great app for Android which is ad free. Here it also offers numerous other useful features which make it a very good app for this list. It is a lightweight app to listen to music and manage your songs. It has an intuitive interface that you can customize if you want to. This app has quick music search and it also allows you to play your music by albums, artist, genre, playlists, and folder. Apart from these, there is a feature in it for auto music pause which you can use to automatically pause music after certain time.

There is a built-in 5 band equalizer in this music player app to boost bass and tweak other parameters. The music queue of this app is simple and editable. You can reorder tracks by simple drag and drop operations. Also, there is an option in to push any song from library to the queue in just one tap. In addition to all this, there are some other useful features in it that other apps lack. Here it offers you a ringtone maker and allows you to share the music directly and offers you an ID3 tag editor to edit song information easily.

To start using this ad free music player Android app just install this using above link. It scans all the songs by itself and then you can create manage your library. It organizes songs in the different sections of the app based on the album, artist, genre playlist, etc. All the features are easily accessible in this music player app. To use the ringtone maker and ID3 tags editor, find it from the sidebar using the hamburger icon. 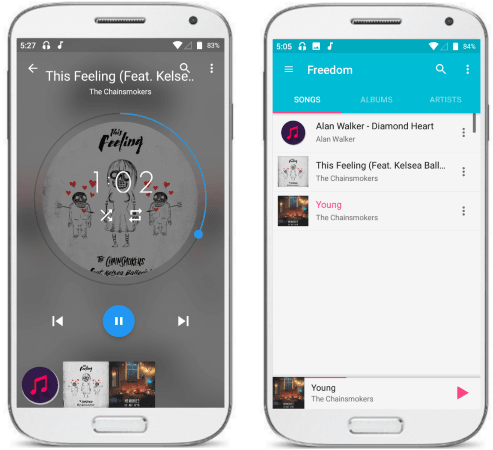 Freedom is a simple ad free music player Android app which you can easily use on your phone. If you need a lightweight music player app for Android which is ad free then you can consider using it. This app has some features to customize the user interface and numerous other features related the playback.

It offers you 5 band equalizer to boost bass and apply some 3D effects that it already has. Some basic features like queue reordering, music search, and sleep timer can come handy at a times. And if you don’t like bright interfaces then don’t worry it has built-in dark mode which makes its interface look pleasing.

Install this app from above and then start managing your music. It automatically organizes the songs library and you can use its other useful features. All the songs appear directly on the now playing screen and you can switch between them by simply selecting from the bottom. The options to customize theme and activate dark mode are in the settings that you can open from its main UI. 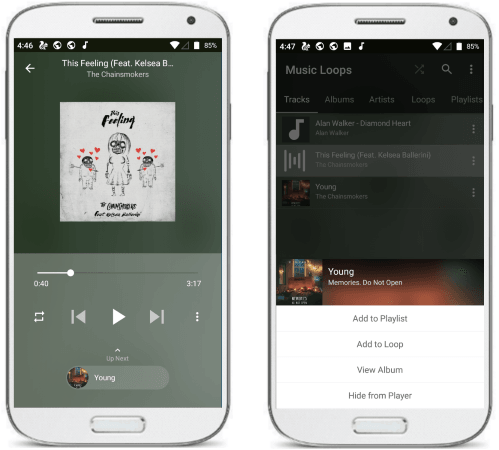 Music Loops is yet another free music player app for Android which is ad free. Here it is a simple music app that you can use to play and organize your music. Just like most of the apps in this list, you will find some similar features in it. Here it offers you a customizable interface and options for quick search, sleep timer, lossless audio format support, change font of the player, and one of the best features of this app is song hider. Here it allows you to hide songs from library that you can later bring back in easy way. Also, there is a feature in this app to access the current song queue without leaving the now playing screen.

Get this app from Play Store and then simply start using it. It will automatically detect all songs from your phone and then you can start listening to them in the way you want. All the audio tools and options are available in the main interface. You can create playlists and then you can add corresponding songs in them. Overall the app is simple and you will easily figure out all of its functions. The options to change the theme are in the settings page of the app. 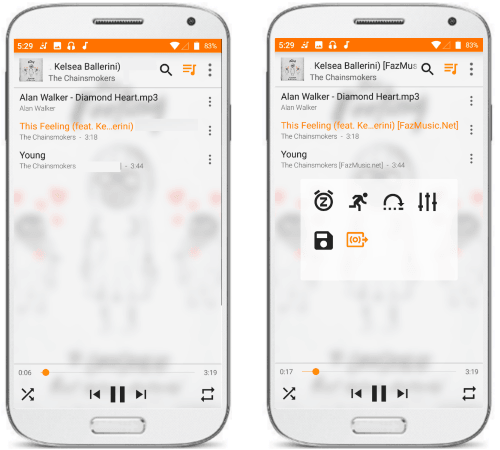 Smart Android users already have VLC Player installed on their phone. VLC is quite a popular player that you can use to play songs on your phone as well. There is a separate Audio section in the VLC app for playing and managing music files. You can create playlists of your favorite songs and push any song in now playing queue in a single tap.

For audio there some useful features such as playing online audio streams, play songs from FTP, change playback speed, jump to specific time, use built-in equalizer for audio effects without any interference of the ads. Also, there is an advantage in using VLC that you will not have to install an extra app for playing videos and movies on your phone. There is one unique feature VLC is that it keeps the history of the recently played media files.

Install this app on your phone and then open it up. Go to the Audio section and you will find all the music files from your phone there. Just select any song that you like from the list and play it. Also, you can start moving other songs in the queue. From the now playing screen, tap on the 3 dots icon to see the options to customize the playback. You can activate equalizer from there to adjust the different sound levels.

These are the best ad free music player Android apps that you can use. With these apps, you can replace your stock music app to enjoy your music with more features without having to be bothered by the ads. All these apps don’t show any kind of ads and are even better than most of the paid music player apps out there. The set of features that they offer are amazing and if you’ve been looking for some free music player apps without ads then you can install any of these.