Expi Desktop Manager is a free desktop application that is used for snapping windows on your desktop screen using hotkeys. That means you can manage the position of all your active windows without resizing them again and again. You can use different screens having multiple zones. And in each zone, you can manage an application and can fit that application on your desktop. Moreover, you can also create multiple profiles in which you can create more screens and zones.

The unique thing present in Expi Desktop Manager is that there are no limit for creating screens and zones. You can create as many zones and screens as you want. These features makes it different than other similar software. It is helpful for big desktop screens to place running applications. And also there are templates available that will help you to quickly create zones.

You can see the below screenshot that gives you an idea about how you can manage running applications using Expi Desktop Manager. 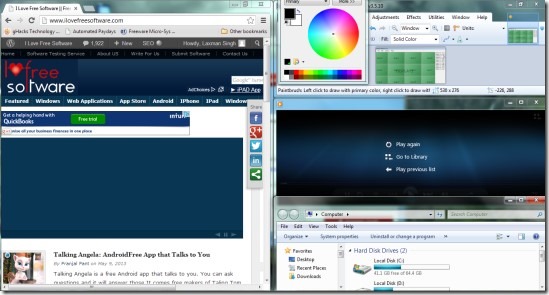 How To Use This Desktop Application Fro Snapping Windows?

Working with Expi Desktop Manager is an easy and simple task. This application requires Microsoft .NET Framework version 3.5 or higher. Download link for this application is present at the end part of this article. On its interface, you need to assign a desired hotkey to a zone and after that you can use that hotkey with any opened window. Although there are some applications which might not work well after managing position such as games that require high resolution. But with most of the applications, you won’t find any trouble. You can create a whole new screen and can add multiple zones just like the below screenshot. 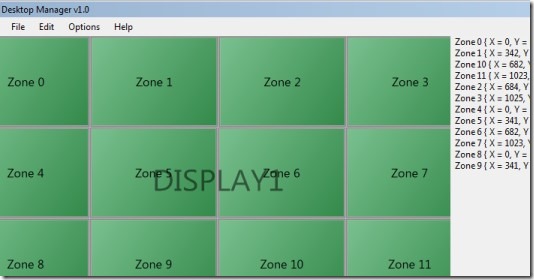 For creating multiple zones, access Edit option available on Expi Desktop Manager interface. After that select ‘create multiple zones’ option. It will open a new window. Here in this window, you can either choose available templates or can create zones by dividing screen into equal parts (horizontally and vertically). Once after this, you will find created zones on its interface as visible in above screenshot. Now you can assign hotkeys and name for created zones.

Click on any zone to change its name and assign a hotkey. You can use any of the available option: Alt, Ctrl, Shift, and Windows (Win key) for assigning a hotkey. For example, Win key+NumPad1 will become a hotkey. Likewise you can create hotkeys using Alt, Ctrl, and Shift. 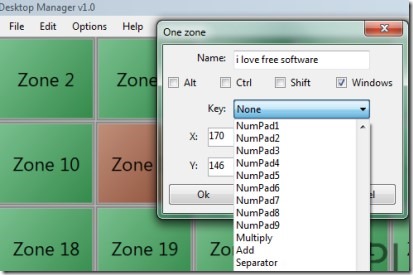 Moreover, you can also change any zone’s X and Y position along with its width & height. Create hotkeys and after that use any hotkey for any active window. 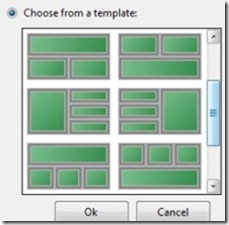 Get Expi Desktop Manager for free.