Newspapers is a free news app for Windows 8 devices that allows you to read through newspapers of various countries of the world. What makes this app unique is that you can actually pin point a country whose newspapers you want to see/read, and clicking on the country’s icon will open up the list of newspapers that you can go through which are exclusive to the country that you have clicked on. The countries are sorted according to continents in the main screen of the app.

When you launch the Newspapers app on your Windows 8 device, you can choose a newspaper and start reading it. It’s as simple as that. The versatility of this app makes it really unique, and it is something that I really like about this app. The option to choose a particular country and read newspapers of only that particular country is a new concept, and trust me, the concept is pretty darn good!

Newspapers is available as a free download from the Windows App Store.

Using the Newspapers app on your Windows 8 device…

When you launch the Newspapers app on your Windows 8 device, you will be presented with an interface which looks like the below screenshot. 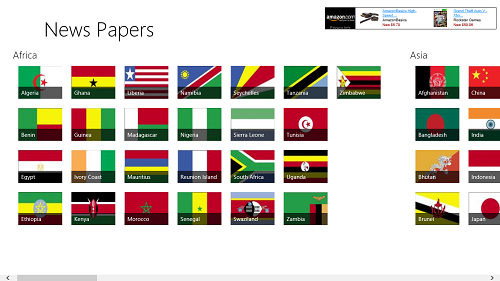 As you can see above, the countries are sorted according to continents. Let me quickly open up the newspapers that the app has to offer for Mauritius. 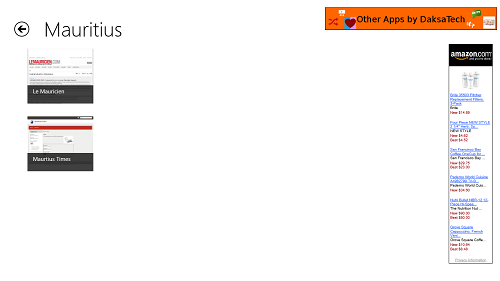 Let’s open up Le Mauricien from above. Note that the number of newspapers available may vary greatly from country to country. I checked for USA, and I was able to see more than 20 newspapers that I could read. Anyways, back to the topic…

Clicking on a newspaper immediately opens up the newspaper in your browser, and the app automatically gets snapped in a docked style view. (see below screenshot) 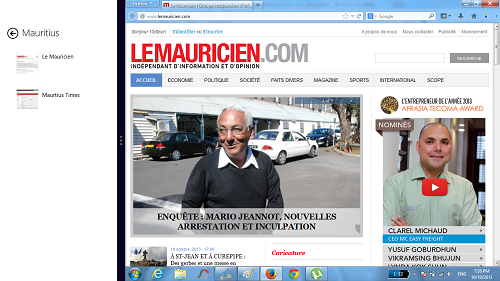 Now this is actually quite unique, as instead of pulling up and hiding, the app intelligently docks itself and allows for multitasking as well, while still running on your screen. If you want to read a different newspaper, simply click on its thumbnail from the docked view. The app is fully functional while docked.

This is all that is needed to be known to get started with using the Newspapers app on your Windows 8 device. We hope that you will enjoy using this app!

You can also check out the Weave News Reader app for your Windows 8 device.

Newspapers is a good app to have on your Windows 8 device to stay updated about the various happenings all around the world. The app is free, and best of all, does not consume much space on your device. The easy to understand interface makes the app pretty much self-explanatory, and hence the app is suitable for users of all age groups!

Get Newspapers for Windows 8.