Moo0 Audio Effect is a free audio editor for Windows. Like the name of it suggests, the main feature that’s offered is the ability to add several different effects to songs and audio tracks that you process. Volume can be increased, pitch changed, various boosts (bass, middle, high) are just some of the effects that can be applied to audio tracks. Simplicity is another great thing about this free sound effect processor.

Interface of Moo0 Audio Effect is certainly one of the more interesting ones when it comes to sound effect software. Normally you’d expect to see toolbars, perhaps even a waveform editor. Convert to drop down menu holds all the effects and audio transformations that are available. 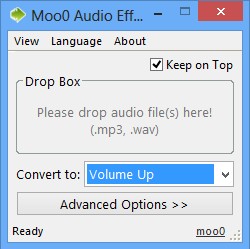 It’s possible to get additional options for tweaking the effect by clicking on the Advanced Options button all the way at the bottom of the window. 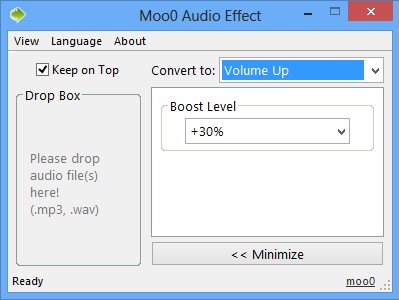 Expanded interface allows you to adjust the levels for the effect that you’d like to apply, and that’s pretty much it, everything else is the same. We weren’t kidding when we said that simplicity is the main theme of this free sound effect software. Key features of Moo0 Audio Effect are:

It’s best that you start by clicking on the Advanced Options button, so that you open up the effect strength level adjuster. Otherwise the default 30% effect gain or loss will be applied. 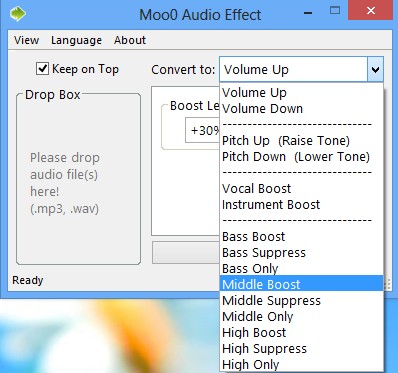 Drop down selection menu is available for both the effect selection and for the effect strength. Once you’ve adjusted everything to your liking, selected the effect that you want applied, it’s strength, drag and drop the audio tracks to the Drop Box area, which is the specified area where after dragging and dropping file conversion will start. 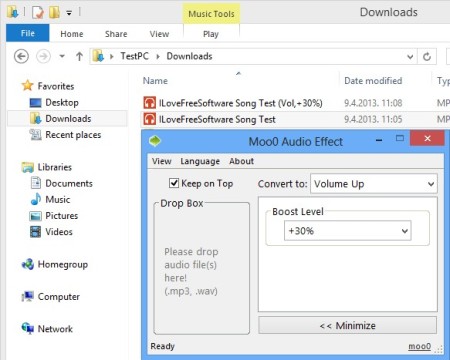 Songs will be recreated in the same folder, with the same extension that they had before, remember MP3 and WAV are supported. They’ll be renamed to reflect the type and strength of the effect that was applied. Only one audio track can be processed at a time.

Moo0 Audio Effect is one of the simplest audio processing applications that we’ve encountered, and even though it’s simplistic in design and the way that it’s used, you still get a lot of useful effect, like volume adjustment, to increase the volume of silent audio tracks, which can be very difficult to listen to. Only one file can be processed at a time, but if you’re not too demanding, this is the tool for you. Give it a try and see how it goes.