Video Player is a software that lets you play video on your computer. Video player supports a variety of video formats including AVI, ISO, MPEG, MOV and FLV.

How to use Video Player

The interface is very simple and attempts to deviate from the typical look and feel used on most applications. There is no menu bar at the top, just the title, help button and window controls. The player window occupies the centre and player controls occupy the bottom. Unfortunately, none of the buttons is labelled or has tooltips. On launching the application you are welcomed by a message prompting you to drag and drop video files onto the interface. Video files can be added by either dragging and dropping or by using the open button which allows you to browse for files you want to open. Unfortunately, the drag and drop feature only works for the first video only-you will have to open consecutive files manually. 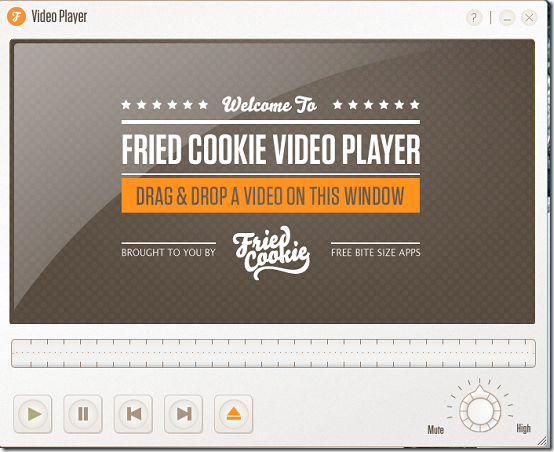 Player controls are just like you find in an ordinary player only that in this application you have to find out what they actually do as they are not labelled in any way. Fortunately, you will find that you are familiar with most of the control. The first button plays video, the second pauses video, the third and fourth allow you to rewind and forward video and the last opens video files. Volume is adjusted via the round button on the right bottom. You can resize the interface as you wish or double click inside the video window to toggle between full screen and window mode. The progress bar lets you view how much of the video you have viewed and what remains and can also be used to specific video frames. Help is available but you need to be connected to the internet to access it. 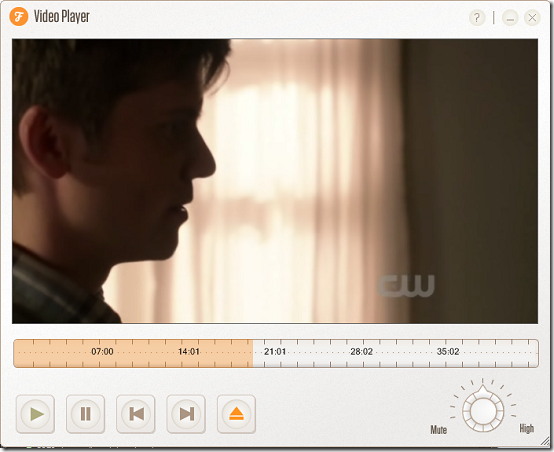 Lovely, unique interface and great idea generally about this Video Player. However, all is not well. Once you use the drag and drop feature on the first video, you can’t drop another video. The program hangs from time to time and becomes unresponsive while still playing video. Audio quality is great but deteriorates when you crank up the dial. The program failed to play some file formats like FLV which was very disappointing as the publisher had stated otherwise-I later learned that the program relies on third party software, K-LITE Codec pack to play some formats. FLV being one of the most common video formats nowadays means that functionality of the program is greatly reduced. I tried to play an AVI file which as tagged at 23 fps and the video could not play seamlessly without freezing every few seconds. The program doesn’t not come with a playlist so you have to play each file individually which is quite inconvenient. Functionality is limited as the program lacks support for common video formats like FLV and MP4.

Video Player is definitely not the best video player out there and you will be better off with top of the range player like VLC media player.