DivXRepair is a free utility software meant for repairing video file for DivX. The tool attempts to get rid of damaged frames and reassemble the file. Once in a while, you come across DivX files with freezing images, lost sound or discoloured pixels which are characteristics of damaged frames on a DivX file.

Once the installation is complete, the installer attempts to set the record straight. It acknowledges that DivXRepair is based on VirtualDub. The installer was not bundled with any annoying adware.

Features of this DivX repairing tool

The main feature of DivXRepair is the video repair feature. It has the ability to break down DivX files into frames and check each for damaged frames. Any damaged frames are discarded and an entirely new file is created from the recovered frames.

How to use it

The user interface is very simple and you will have no problem finding your way around. The simplicity of the interface makes it easy to use. The interface holds three buttons at the top, a file list at the centre, and a progress bar and two buttons at the bottom.

To fix any DivX files, all you need to do is to browse for a file and hit the Repair file button. The program immediately opens a text file containing information on the bad frames it found on the file. You can empty the list by hitting the Empty list button. 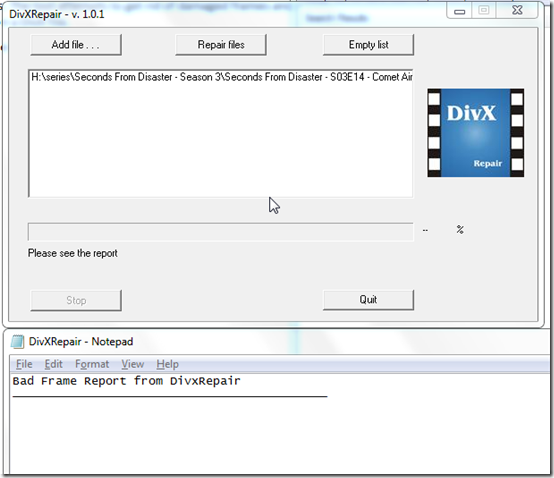 I found it very weird that the stop button was not enabled during repair. You had to use the Quit button to halt the repair. The interface did not allow for resizing of the program window.

Trouble began once I set out to find out if the software actually works. After a dozen tries I gave up on the program. Nothing I tried seemed to work- I got to crash the program half of the times I tried. On the other half a dozen tries, the program attempted to repair files with no success. It opened the log file and froze until I hit the exit button. Apart from the text file, there was no other way to find out what progress the software was making. The software lacks support for drag and drop. I was able to empty the list during repair which I think should not happen. The reliability of the software was very much at question and you are better off looking for alternatives like VLC media player.

I get the feeling that not much work went into the DivX repair tool development and testing of the DivXRepair.