File Compare Utility is a free software to compare text files which allows you to open up two different text documents and scan them for differences. Text documents can be compared using two different methods. One of them will only report missing data, while the other one will to through each line of the documents that are being compared and report back in what way is the data from the detected lines different, instead of only what’s missing. 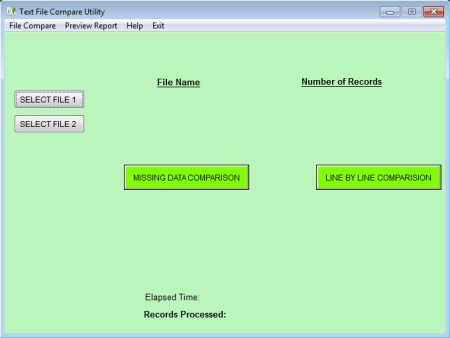 Interface of File Compare Utility can be seen on the image above. It’s very simple, in the top left corner of the screen we see a classic menu, while down below only two buttons for opening up text files for comparison can be seen, and another set for starting each one of the comparison methods that we mentioned in the introduction. Down below status of the comparison can be seen. It’s useful when you’re comparing large files, which might take a bit longer to process, users might think that the application froze without it.

Key features of this Text File Comparison Software are:

Manually looking for differences between text documents can be very tiring, but in some situations like for example when you have two different versions of the same file it is necessary. Possible errors and updates made to the newer versions can be easily detected with applications like File Compare Utility.

How to Compare Text Files: 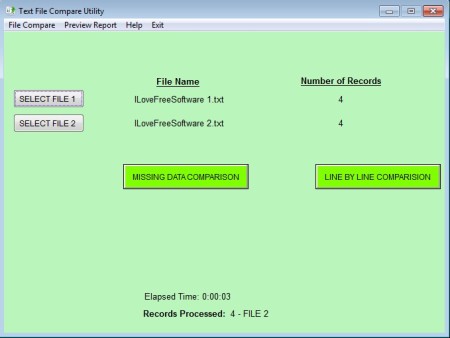 File name and Number of Records columns are gonna fill out automatically. Record is a line, as you can see both of our test documents have 4 lines, and the two of them are different from each other. 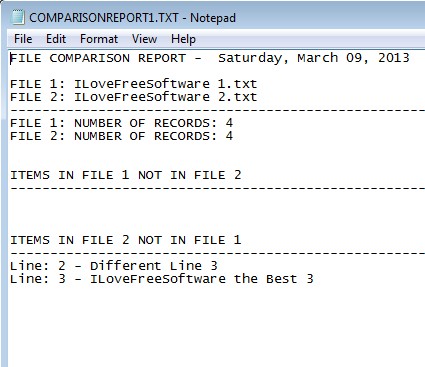 First we used the Missing Data Comparison and as you can see we received reports that lines 2 and 3 from the second file are missing in the first one. Results of the scan are opened inside Notepad. 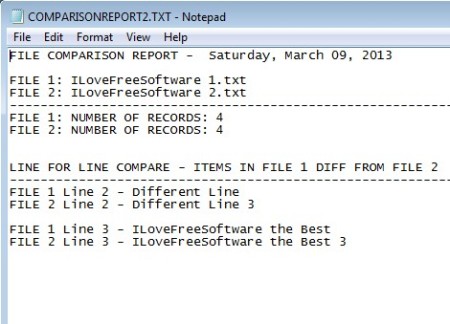 Using the line by line comparison method, we received a list of lines and their accompanying values which are different between the two documents. First the line from the first file and then the line which is different from the second files is gonna be listed. This will go on until the end of the document.

Comparing two text documents is very easy with File Compare Utility. Setup, like we already mentioned, only requires three clicks. The only drawback that we noticed would be the comparison reports are opened up in Notepad, in the form a TXT document. It’s a bit more difficult to figure out which is which, but hopefully newer versions of this free file comparison utility will take care of that. Free download.