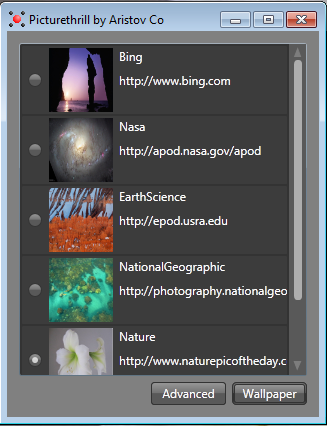 Picturethrill is a small program, only 1.2 MB in size. Its dependent on .NET Framework v4 and above so before you install the program you might want to consider upgrading the .NET Framework, otherwise the program will throw errors at startup, like it did in my case. It only runs on Windows 7, because previous versions of Windows have different mechanisms for wallpaper setting which are incompatible with Picturethrill.

How does Picturethrill wallpaper changer work?

When you first run it, Picturethrill will populate its list with 5 different images from 5 different sources. First on the list is Microsoft Bing search engine, its image search engine is being used in order to fetch wallpapers.

NASA website is known for having astonishing wallpapers, and that is the reason why it is being used by Picturethrill. Wallpapers that you get from NASA will of course be about the Universe and all the beauties that it contains.

Earth Science picture of the day is a website that posts nature photos, on a daily basis, which Picturethrill fetches for you so that you can use it as your desktop background.

Fans of National Geographic’s exquisite photos will be delighted to hear that it is also used as a wallpaper source. You’ll get the award-winning pictures from all over the world as your desktop wallpaper.

Last on the list, but definitely not the least would be the Nature picture of the day website, which is very similar to Earth Science website, the very name of the websites says that it shows nature pictures on a daily basis 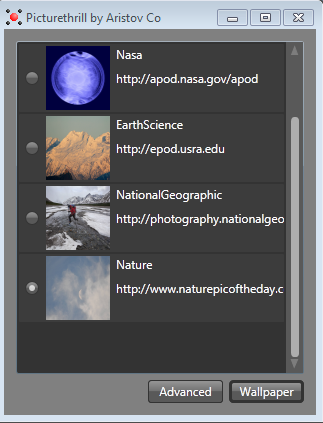 Image above is Picturethrill with pictures preloaded in the list so that you can see what’s being offered at the moment. When you see a picture that you’d like to use, click on the Wallpaper button and that image will be downloaded and converted to a wallpaper. Each day new set of images will be placed in the list, and you can change them as you see fit. 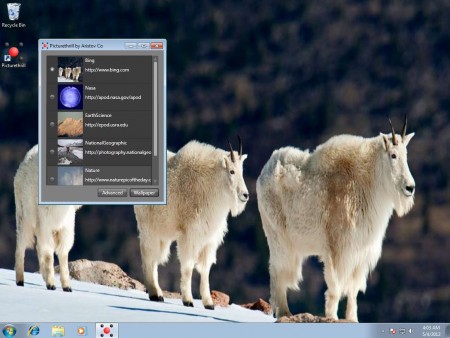 What kind of wallpapers will Picturethrill show?

Downside of Picturethrill wallpaper downloader and switcher would be that wallpapers which it downloads mainly revolve around nature. Three of the five websites from where free wallpapers are being downloaded have pictures about nature. Bing image search and NASA website are the only ones that will show different wallpaper, but most of the time images will have nature as their theme in some form. Those who want to have wallpapers of other things, like cars, abstract, technology, maybe girls, well they’re going to have to wait until the author creates a new version of the program, which will grab images from a wider range of websites.