Angry Birds Seasons is a whole new version of the popular Angry Birds game for iPhone. Angry Birds Season is supported by iPhone, iPad, and iPod. The game comes up with new interface to play in this season. Play it from the old Halloween to Chinese version.

The idea behind this version of Angry birds is celebrating festive seasons. The birds are celebrating festive season all around the world. Even the levels of the game comes with a new environment to play the game with a whole new idea and excitement. But, you need to hurry up and install Angry Birds Season on your iOS device, as the free version is available till 12th July 2012 (Thursday). 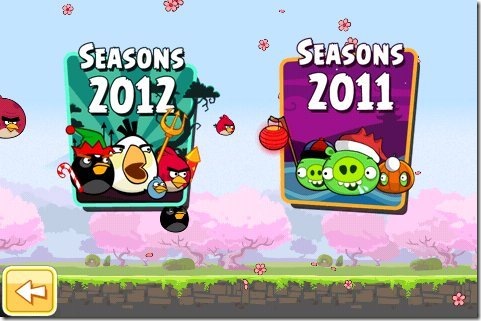 Seasons in the new version include 2012 and 2011. Season 2012 festivals include Piglantis, Year of the Dragon, Cherry Blossom, Wreck the Halls, and Ham’O’Ween. Season 2011 include Moon festival, Easter eggs, Summer picnic, Go green, Hogs and Kisses, Get luck, Season’s greedings, and Trick or Treat. The game comes up with total of 290 levels to play the game. So spend your whole day to crack the levels and become the winner of one more Angry Birds Seasons game. The good part of this new version is that, the game comes up with more challenging game levels. You can discover golden eggs and play with popping actions of pigs. It’s time to move forward and play this hunting Angry Birds Season on your iOS device.

If you have an Android phone, then download Angry Birds Space game for Android.

If you want, you can also play similar games to Angry Birds.

Features Of The Game:

Click here and install Angry Birds Seasons from our App Store. You can  also head to search bar of your App Store in your iPhone and then search for the game to install it directly on your iPhone.

If you are a fan of Angry Birds and play it on a regular basis, then this new version; Angry Birds Seasons must be the one you were hunting for. So stop all your searches for something new and play this game on your iPhone, iPad, or iPod.