Here’s a list of 5 stopwatch apps for Android which will allow you to use your phone or tablet as a stopwatch. Training, exercising, cooking, working on a task are just some of the situations where you need to keep track of time. Android powered devices can be a lot of things, and it’s no surprise that they can also be something as trivial as a stopwatch. Apps from the following list can be used as just that, a stopwatch app, but in some cases they can be even more than that. 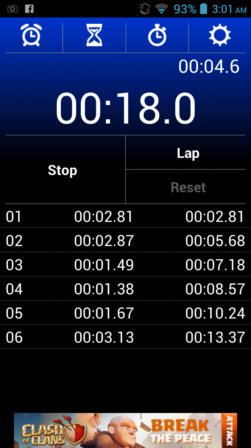 The stopwatch app will become available from within the alarm app after you’ve installed it. It’s basically an extension for Alarm Clock Xtreme. Stopwatch lets you save in between results for laps, and is very simple to use. Don’t forget that Alarm Clock Xtreme also has a built-in countdown app. 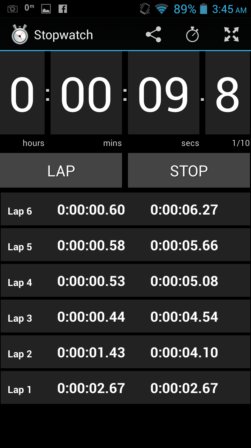 Stopwatch & Timer is a combo of a stopwatch app and a countdown app all rolled into one. The stopwatch portion of this app works just like Stopwatch Xtreme. It supports laps and is very easy to use.

Countdown timer configuration window can be opened up by tapping on the timer icon in the top right corner of the app. Swipe the screen to adjust hours, minutes and seconds and hit start to start the timer.

Also have a look at Android Timer App to Set and Run Multiple Custom Timers. 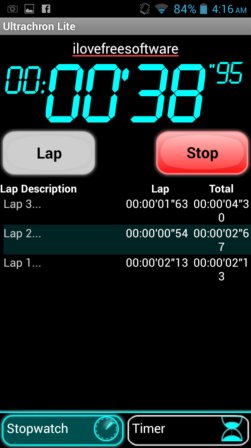 UltraChron Stopwatch Lite is another stopwatch/countdown app combo, but it has a couple of interesting additions when compared to the two previously mentioned stopwatch apps for Android.

The additions that I’m talking about are voice notifications (when a lap is finished, time is read out to you). App will also let you type in a name for the current event that you’re measuring (by tapping on the default title at the top of the app). 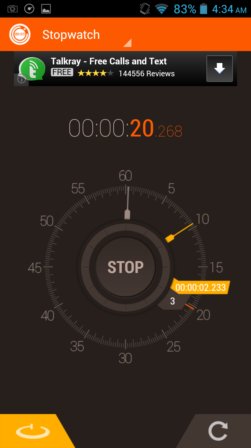 Stopwatch Timer has a unique interface that simulates an actual stopwatch interface, the kind that you usually find with trainer and professional athletes.

This stopwatch app also supports laps, and it has a timer. Timer presets are available for quick config. When in timer mode notifications will be played once the timer runs out. Lap times notifications can be sent via email.

Also have a look at Free Time Tracking App for Android: Jiffy. 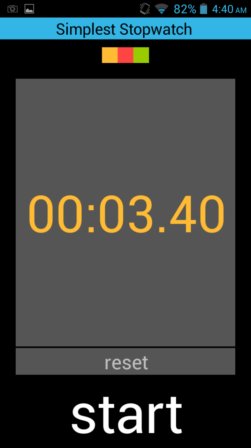 The Simplest Stopwatch is for all those who don’t need the kind of advanced features that all the other stopwatch apps that I covered here.

It’s just a stopwatch which you can pause and change the colors of the numbers. App displays minutes, seconds and milliseconds.

Get The Simplest Stopwatch.

I really liked Stopwatch Timer mainly because it has a gorgeous interface that’s nicely setup. All but the last app from the list are pretty much the same when it comes to functionality. This shouldn’t be an issue for you. Give them all a try and let me know which one you think is best in comments down below.