By Pranjal Pant on May 10, 2013 Android
Editor Ratings:
User Ratings:

Cut the Rope: Time Travel is a free game developed by ZeptoLab. This game stars the ultra adorable green monster Om Nom and his ancestors who are always hungry for candy. It has smooth graphics and offers 6 chapters, each consisting of 15 levels. A few chapters are locked initially, but eventually they get unlocked as you progress through the game collecting stars.

It also has a an additional feature of Superpowers, by which you can complete any level that you’re stuck at. You are provided with 3 superpowers with the game, and when they run out, you have to purchase more superpowers.

The game also showcases a few Om Nom cartoons, which are also quite fun to watch. No stone has been left unturned to make sure that this game becomes as perfect as it possibly can. 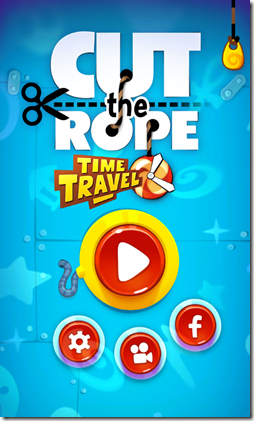 This game is a perfect pastime for Android users all across the globe. This game is different from other games in Cut The Rope lineup of games because in this game, you have to feed two little green monsters instead of one, making it double the fun!

(If you are a fan of original version of Cut The Rope, do know that you can play Cut The Rope online.)

How to play it?

Playing this game does not require complex step by step instructions. You just have to slice ropes on which the candy is hanging in such a manner that the candies fall into the mouths of the monsters.

Cut The Rope: Time Travel is an amazing game. It should be a must have app on every android user’s list. The graphics are exceptionally good, and the constant updates from the developer is the icing on the cake. My only complaint with this app are the ads that it shows at times, however, as it’s a free app, I don’t think much of it. Also, if you play offline, there will not be any ads whatsoever.

The game will especially appeal to young children- I can say this with confidence as my 6 year old cousin played this game for hours without getting bored at all!

Click Here to get Cut The Rope: Time Travel