LegTris is a free Lego Tetris game for Windows PC that lets you have true Tetris like experience on your PC using Lego pieces. What’s special about this Tetris game is that the falling Tetris pieces are actually Lego blocks. So, this game actually combines two of the most nostalgic things from our childhood (and maybe even adulthood!): Tetris and Lego.

This Lego Tetris game is pretty simple in itself, like all the other Tetris games out there. And the only difference that it brings is that it nicely integrates the Lego pieces in Tetris. So, if you have been playing Tetris since a long time and want to get a fresh new feel, LegTris just might be it. 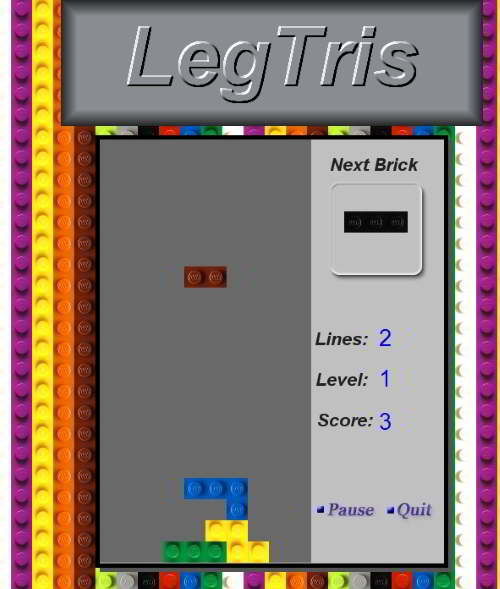 There is really no dearth of software and apps to play Tetris out there. In fact, Tetris is available for even some unimaginable tools. Like, you can play Tetris in Notepad, Play Tetris in Excel, and even use Chrome Extensions for Tetris. So, wherever you are and whatever you are doing, Tetris can potentially follow you.

So, with such a wide variety of Tetris games already out there, it is very difficult for a new Tetris game to stand apart from the rest. And LegTris is trying to do exactly that by integrating Lego bricks in its Tetris game. Let’s see how does it go about doing that.

How to Play Tetris with Lego Bricks:

Its very easy to get started with LegTris. There is no installation required; just download the zip file from the link available at the end of this review, unzip it, and run the exe file to directly launch the game. The game looks like the screenshot I added above.

It plays exactly like Classic Tetris Game; the pieces are falling one at a time, and you need to arrange them so that horizontal rows can be completed.

The game is played completely by keyboard. The pieces are moved by using arrow keys; use up arrow key to rotate falling pieces so as to orient them properly. Left and right arrow keys are used to move them around, and down arrow key is used to speed up the downward fall.

One interesting feature I like in this game is that it shows a small shadow that where exactly the falling piece will fall if it were to stay in current orientation. This is a great help so that you will know if you need to rotate the piece or move it around.

And of course, all the falling pieces are Lego pieces.

This Lego Tetris game shows your score on the Right side, alongwith number of lines you have completed, and level you are on.

I am a big fan of Tetris game. Though, I am not too good at it, but I do like playing it every now and then. And when I came across this Lego version of Tetris, I was pretty excited to try it out. However, I don’t think the developer really pushed the limit on this one. The background is pretty bland, and after a while you stop feeling the Lego effect, and feels like just any other Tetris game. So, I would still keep coming back to this game after a while, just to enjoy a different flavor for Tetris, but I would also keep looking for out for some other Lego Tetris game that is probably more polished.

Meanwhile, you can get Legtris from here.