I have reviewed some good applications for Mass Unfollow. ManageTwitter also joins that group, and is one of the easiest to use. 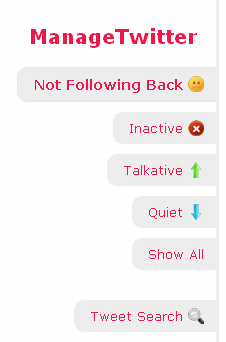 UnFollow Those who are Not Following Back:

ManageTwitter will show you all those people whom you are following, and they have not tweeted in last 1 month. You can mass unfollow all of them to clean up your Twitter list.

ManageTwitter also lets you unfollow those Twitters users who tweet less than once per day. I really don’t think I would like to unfollow anyone who does not tweets often. I am just good with unfollowing those who have not tweeted in a month.

ManageTwitter is really easy to use, and one of the best ways to clean up your Twitter list. However, I really wish it let me customize some options. Other than that, I like ManageTwitter.