Here’s a list of 5 NFO file viewer software for Windows 10, which can be used to open up the famous NFO file format. You’ve probably found NFO files alongside downloads where they are used to give information about the downloaded software, media files, etc. These files usually contain ASCII art and to view them properly you need special software. Text editors will do most of the time, or there’s also specially made NFO file viewers which will properly render the information contained inside NFO documents. Following applications are just that. Let’s see how exactly it is that they work.

Compact NFO Viewer is a small and portable NFO viewer for Windows 10, which comes with a surprisingly large number of options that can be configured. 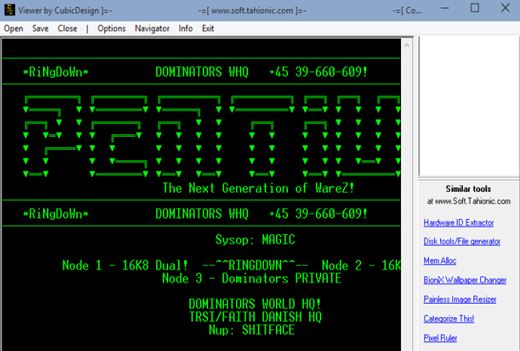 Like practically every other application that I tested, this one also isn’t just for viewing NFO files, but also for editing/creating new ones. Font (type, size, formatting) and background color are tweakable. By default, it’s the standard green text on black background. Link extractor is included for 1-click link extraction from NFO files.

Free Nfo Viewer is much more simpler than Compact NFO Viewer. Even though this software is simplistic, it’s not portable, so you need to install it in Windows 10 to use everything that it has to offer. 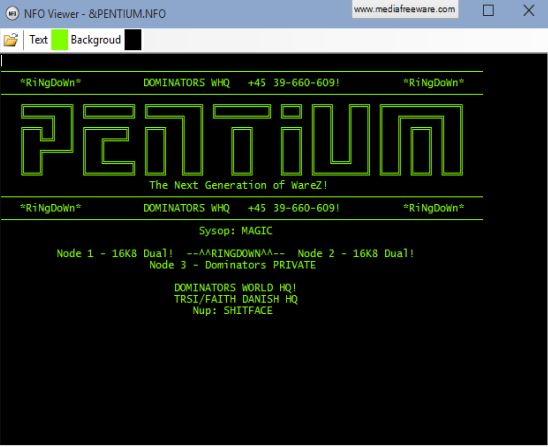 No additional tools are included, and the only two other options available next to “Open file” in the top right corner menu are the background color manager and font manager. Like I said, this is a simple and to the point software, so don’t expect wonders.

Also have a look at 4 Free File Viewer Software.

NFOPad is a cloned and completely re-done version of Notepad with focus on supporting NFO file format. Instead of just seeing simple text, this software will beatify everything by default so that NFO files are rendered like the one on the image down below. 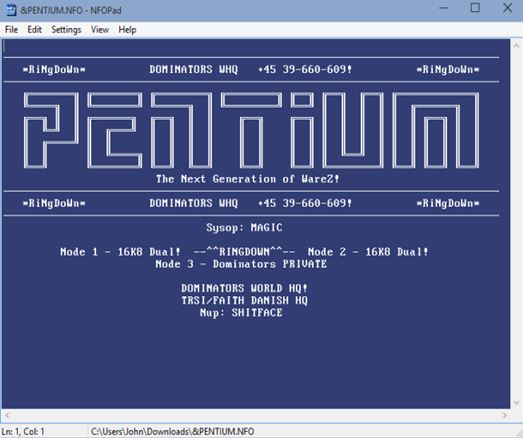 Use Edit and Settings from the top left corner toolbar to tweak how the NFO files are going to be displayed. By default it’s white text over blue background.

NFOlux is a file viewer software which doesn’t just stop at viewing NFO files. It can also be used as a NFO editor, which is something that most of the other applications can be used as. What’s different about NFOlux is that it has the “Auto Generate” top left corner option, which lets you generate NFO files for media and software releases using built-in templates. 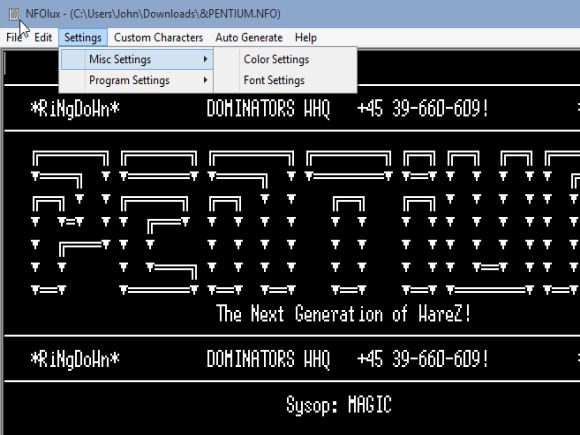 The usual tweaks to the appearance of the NFOs are possible like changing font, background, using custom characters and more.

Also have a look at 3 Crash Dump Viewer Software For Windows 10.

iNFekt has a modern UI. Top left corner toolbar kinda reminds me of the ribbon toolbar found in Office. iNFekt also has the option for displaying the NFO file in 3 different work modes: Rendered, Classic, and Text Only. 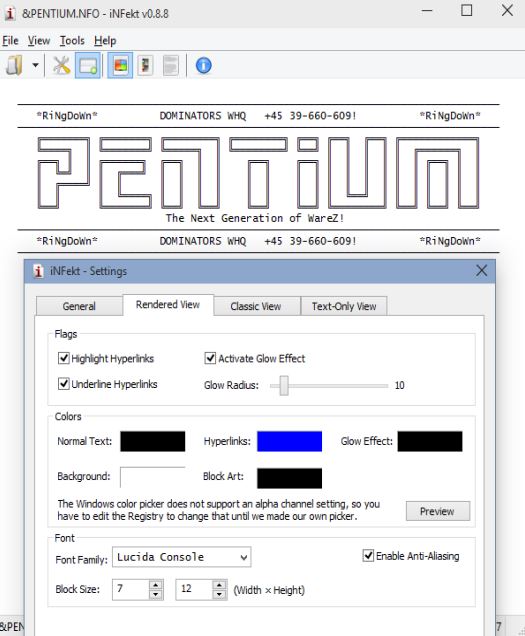 Rendered will render the NFO art using color, Classic will do it using standard black and white (or other colors of your choosing) and text only will only show text without any formatting. Additional tweaks can be made to each one of these by opening up settings.

I like NFOlux and iNFekt as NFO Viewers for Windows 10. NFOlux has the auto generate functionality, which can come in handy for creating NFOs. In iNFekt I really liked the fact that it has the “Rendered” work mode for creating advanced color renderings of NFO ASCII art. Let me know which NFO file viewer software you think is best in comments down below.