RecForge Lite – Audio Recorder is a free Android app that allows you to record audio on your Android device with a lot of ease. The app has  beautiful interface, well honestly speaking, it has the best interface that I have ever seen on any third party audio recorder app. When you launch the app, you can easily start the recording process by clicking on a neat looking record button at the bottom of the screen. Once you click on it, you will get an easy toggle to pause or stop the recording, and the greatest feature of this app is that you can actually change the decibel gain of the recording within the recording itself. This is very handy because it allows you to amplify your recording during the recording itself, and you don’t need any additional software to edit your recordings.

RecForge Lite – Audio Recorder is available as a free download from the Google Play Store.

Using this app is as easy as anything can get. When you launch the app, you will be presented with an interface which looks like the below screenshot. 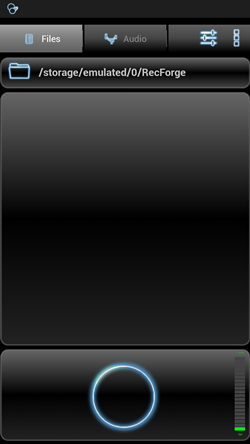 In the above screenshot, you can see the record button at the bottom of the screen, and you can also see a little green bar. This bar fills up as you speak louder, and behaves like a sound intensity detector. When you press the record button, you will be presented with a screen which looks like the below screenshot. 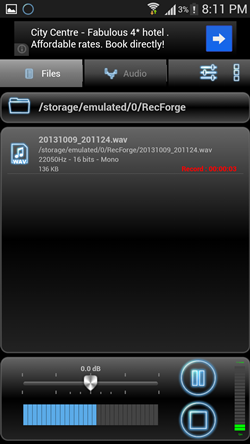 When the audio is recorded by this audio recording app for Android, you can play it back by clicking on the recording that will appear in the above screenshot, and as soon as you click on it, you will be taken to the Audio tab of the app (if you look closely in the above screenshot, the app has two tabs, Files and Audio). This tab will show you a neat waveform of your recorded audio, and you can either cut bits of audio from this screen, or you can finalize it by clicking on the Save button. You can also share the audio from this screen via the Share button, and that’s all you need to know about to use this app. (the screenshot of the audio tab is shown below) 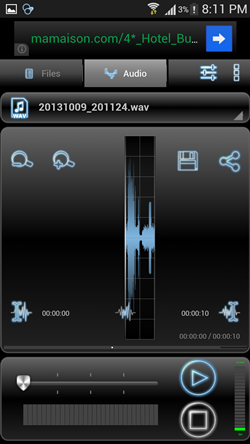 You can also check out the Sound Recorder app for Android which also allows you to record audio.

Features of this Sound Recording App for Android:

+ Option to allow amplifying/attenuating(de-amplifying) during the recording process.

+ Post recording, you can cut pieces from your recording to edit it.

+ Easy options to share your recordings from within the app itself.

RecForge Lite – Audio Recorder is hands down the best audio recording app on the Google Play Store, with the plethora of professional features that it offers like amplifications, sound editing etc. The only drawback of this app is that it has ads, and apart from that, it is an absolutely incredible third party audio recording app for your Android device.