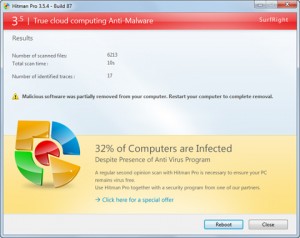 SurfRight proudly calls Hitman Pro as the ‘Second Opinion Malware Scanner’. If your child is suffering from an illness, the first thing you will do is visit a doctor. If he is not able to diagnose the problem and still your child is not feeling well, what will you do? You will visit a second opinion doctor. This is the example used by the developer to describe as to why Hitman Pro is called the second opinion malware scanner.

A recent research has shown that the leading antivirus software that most people make use of is not able to provide 100% protection. Hence, just installing computer security application from a single vendor is not enough, you should also rely upon a secondary program to make sure your system is completely safe and secure.

This does not mean that you should install second antivirus software. Installing two antivirus programs on a system is not advisable as there will be conflicts and frequent crashes. Hitman Pro, is the best second option that will double check your system for any security loophole.

I personally prefer to use Panda Cloud Antivirus for the second opinion, as it is light on system resources, and can provide protection against latest threats because of its cloud based infrastructure.

Another interesting option that you can try is Threatfire Behavior Based Antivirus.

Here are the features of Hitman Pro: