BCArchive is free data compression software that can compress files and folders and encrypt them in a single file. Password encryption and public key encryption are the two types of encryption found on BCArchive. It has a very simple user interface and is quite fast and secure.

Another similar software that we reviewed earlier is StorThing. 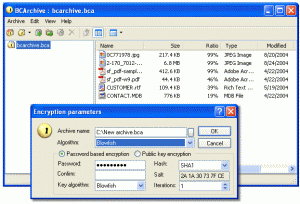 There are many data compression software available online such as 7zip, then what sets the BCArchive application separate from others? The compressed files that you create with these applications do not provide a strong security when it is sent over the internet.

Even though BCArchive has a very simple user interface, but when it comes to sending the compressed data over the internet, it is very safe and secure.

If you want to back up some files and folders on your computer, you can add to the BCArchive and specify a password to encrypt it.  The same password can be entered to decrypt the archive.

Instead of typing the password to encrypt and decrypt data, BCArchive allows you to do the same by entering a public key (a secret key that is known to the sender and the recipient).

This strong built-in encryption means that you do not need to use a separate file encryption software to encrypt zipped files.

Here are the features of BCArchive:

BCArchive is a very good option to securely zip and encrypt your data.