Official Flickr Uploadr (beta) has been launched recently for Windows and Mac. It lets you bulk upload photos to Flickr account from the desktop. All you need to do is select folders (containing the images) that you want to upload and rest of the task is done by this uploader itself. It will run silently in the system tray while uploading the photos and you can also check upload process, whenever needed.

There are two very interesting features of this software. One is that you can remove or add new folder(s) in between the uploading process. Other feature is that it automatically creates albums of those folders with the same name on your Flickr account. However, there are a couple of features that I wish are released in future updates of this software. For example, it should let users select pictures that you want to upload and set the privacy of those photos. Currently, all your uploaded folders remain private to you. 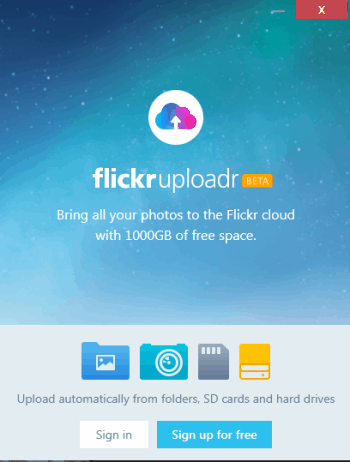 Above you can see the beautiful interface of this Flickr Uploadr software.

Flickr Uploadr provides a wizard that makes it easy to upload photos. You first need to Sign in to your Flickr account using the available button. After this, you will come to the next step in which you need to select picture folders that you want to upload. You can also uncheck any folder if that particular folder is added accidentally. 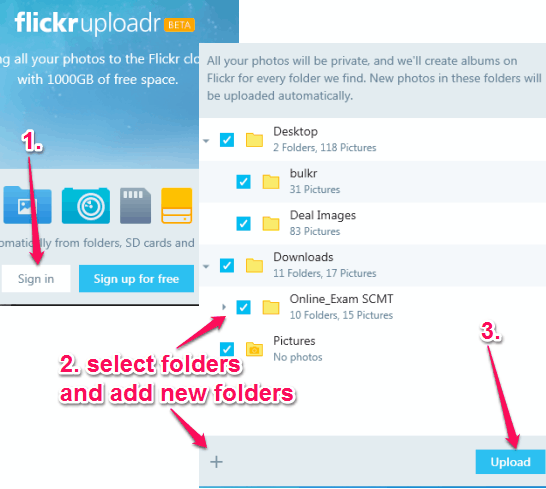 That’s all you need to do. As soon as you have selected the folders, you can jump to the next step in which it will start processing folders automatically and upload all the images one by one to your account. Flickr Uploadr will run in system tray. You can right-click its system tray to upload and remove any folder and to view the Upload status. 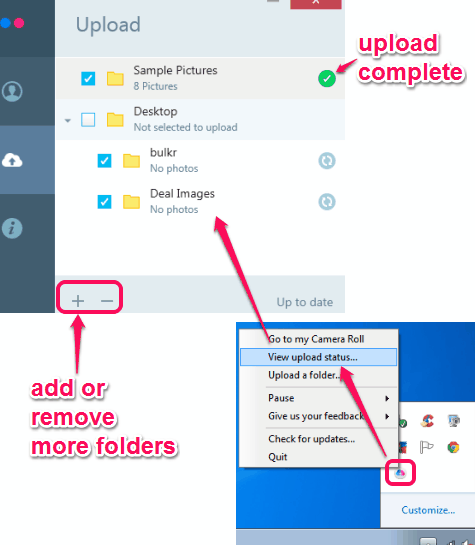 Flickr Uploadr is really useful for all Flickr lovers as they can now directly upload their lovable photos from PC to their accounts. This tool is now especially useful, because Flickr has increase the free storage space to virtually limitless (ok, 1TB to be precise), so we can store all the photos from our PC automatically to Flickr. I, personally, would use this to get my photo folders out of my self-syncing Dropbox folder, and then use my Dropbox space for storing more important stuff (no, not mp3s, there are other options for that).