Space Jet 3D is a free spaceship game app for Windows 10 where you have to fight other spaceships. In this game, you have to play as a pilot who can shoot bullets out of his ship’s turrets to destroy enemy ships. When you run the game, you will be first prompted to create the gamer profile with a name of your choice. The initial levels are the tutorials to the game and as you progress through the game there will be no more guided levels in the game, and you will be on your own. The game is a really nice way to experience the thrill of being in the pilot seat of a combat spaceship and the amazing graphics ensure that you will be glued to your seat for a long time.

Space Jet 3D is available for free from the Windows App Store. 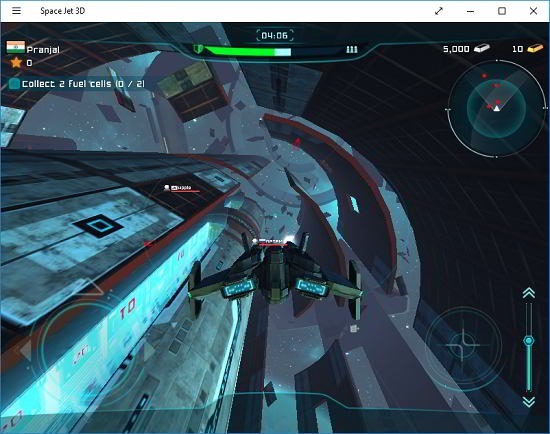 The game has relatively simple controls where

PRO TIP: As is the case with several flight based games, the up arrow makes the vehicle go downwards and down makes it go upwards because the flight systems in general (even in real life) employ joystick type controls where pulling the joystick towards you makes the flight go up and pushing it away from you makes the flight move downwards. So in this game as well, the up and down arrows act as the push and pull respectively and don’t stand for the standard upward and downward.

Launching the game will take you to the below shown interface. 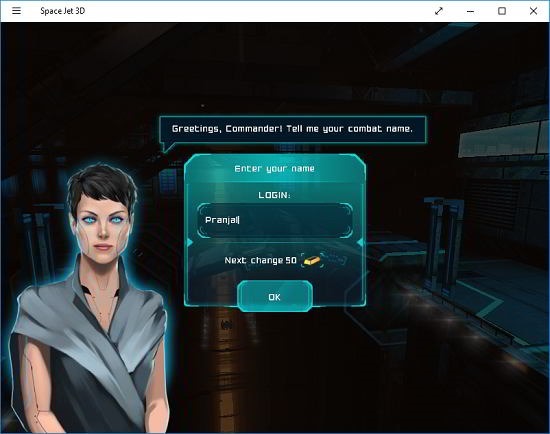 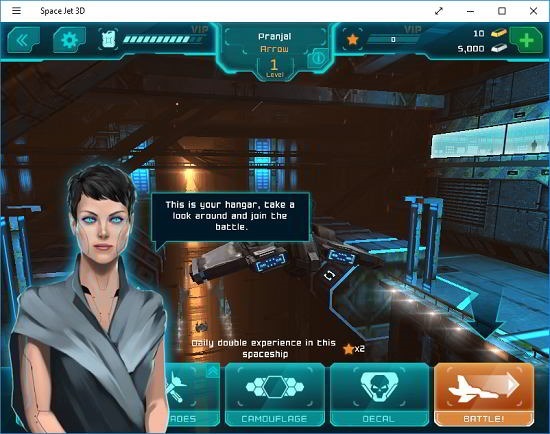 You can see the helpful lady telling you the basics of the game along with the menu buttons at the bottom of the screen. You can either choose to customize your spaceship by using the Upgrades, Camouflage, Decal buttons or you can simply head into the heat of the battle via the Battle! button at the bottom right of the screen. Let’s skip the customizations and get into battle!

In the battle, you can see your spaceship flying at high speeds. You can also see the map at the top right of the screen which allows you to see your spaceship along with other spaceships marked with red dots. The aim of the game is to take down as many ships as possible without dying/getting your spaceship damaged. You may use the Controls mentioned at the beginning of this review to control your craft and to shoot ammunition at the enemy ships. Your ship health is always visible at the top center of the screen. When the level is completed, you will be able to see the level stats, and how you performed in the level. 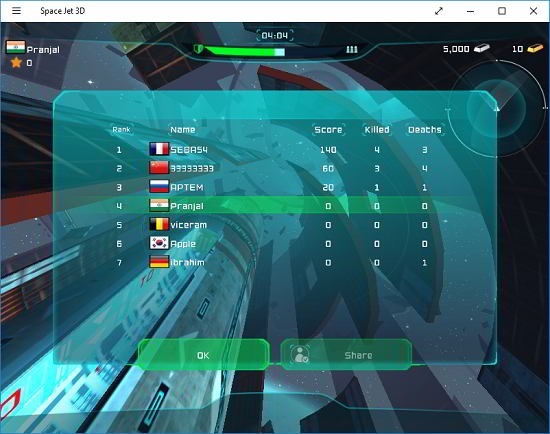 As you can see, the players along with their respective kills and deaths are visible in the stats screen. You can also see their score. Heading back to the main menu of the game, you can also choose to upgrade your ammo and other stuff on your craft. This is possible via the Upgrade menu option. Clicking on the Upgrade menu option takes you to the available upgrades. 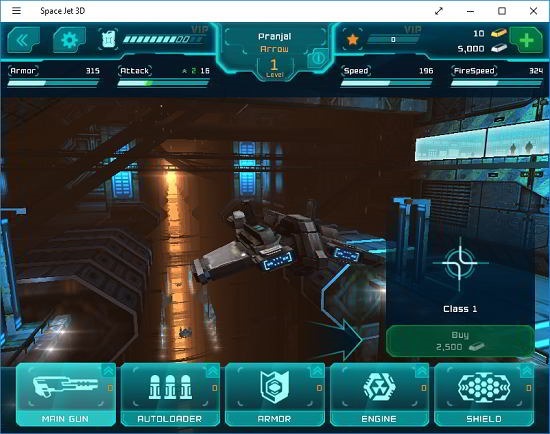 As you can see above, you can choose to upgrade your main gun, autoloaders etc. Upgrades can be purchased with the help of silver and gold bricks that you can win during gameplay by making a high score, or you may also choose to purchase these bricks with real money by clicking on the Plus button next to the bricks at the top right corner of the above shown screen. Overall, the game offers a nice gameplay experience and you will surely have lots of fun playing this game on your device!

Space Jet 3D is a well designed space battle game for Windows 10 devices which allows you to compete with players all over the world. The game has great graphics and is insanely fun to play. You may grab the game for free from the link below.