Anatine is a free Twitter software for Windows. This Twitter client for Windows comes with all the basic Twitter features. It displays tweets of people you are following on the home tab. It lets you tweet, send and receive direct messages, and search for any Twitter handle or Trending Hashtags. In terms of interface, Notification and Messages also have separate tabs.

There is no official desktop software for Twitter, especially since Twitter made Tweetdeck web-only (though, there is an unofficial desktop client for Tweetdeck). Opening browser all the time to login to your Twitter account might seem unpleasant, so there comes the need of a third party Twitter client. And, Anatine surely can take care of your basic Twitter needs. But, Anatine doesn’t let you access multiple accounts at a time, unlike may other Twitter desktop clients. 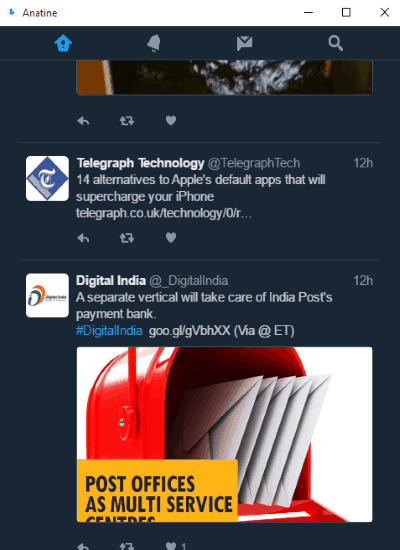 Anatine is a portable desktop Twitter client, so you don’t really need to install this software. You just need to extract the downloaded ZIP file of the software and run it. A Twitter login window pops out on running the software, on logging in, interface of Anatine appears.

It has four tabs on its interface named Home, Notifications, Messages, and Search Twitter.

There is no direct option to go to your own profile but you can visit your profile by using keyboard shortcut “g” and “p”. Your profile window has three tabs:

The option to edit your profile is also available on this window. You can edit basic info of your profile, change password, and change your email here. 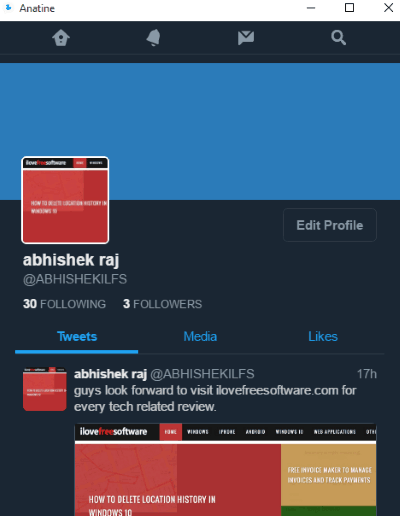 Other profiles also open as your own profile with a choice to Follow or Unfollow them. There is also a list of actions available on other profiles named View List, Mute, Block, and Report. 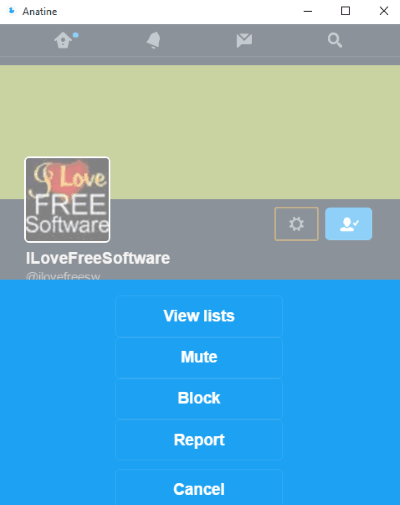 Keyboard Shortcuts: There are certain features that cannot be accessed from the interface, but shortcut keys have been assigned to execute them. Some of these shortcuts are:

Anatine is a good free open source Twitter client for those who spend a lot of their time on Twitter. Its user interface is very similar to that of twitter app on your smartphone, making it very easy to use. The only problem it has is that it doesn’t let you use multiple accounts at a time. Other than that, its a great free twitter software for Windows PC.